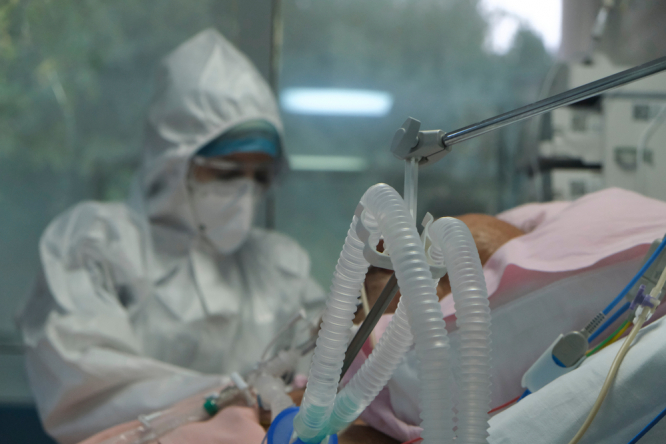 A doctor in Corsica said hospital staff were 'confident' despite the challenges ahead Pic: Alexandros Michailidis / Shutterstock

Hospitals in Corsica and Provence-Alpes-Côte-d’Azur are to launch emergency measures to counter a fourth wave of Covid-19 cases sweeping the regions.

The plan blanc (white plan) has previously been introduced in hospitals in France when they have been under intense pressure due to rising Covid case numbers.

Corsica and Provence-Alpes-Côte-d’Azur are currently experiencing the highest numbers of Covid cases in France.

In Corsica, 65 people were hospitalised with Covid-19 on August 3, and 14 Covid patients went into intensive care, the site CovidTracker reported. Since July 31, 700 people have tested positive.

In one of the Mediterranean island’s major cities, Bastia, hospital capacity has already surpassed 79%.

Corsica now has the highest incidence rate (number of cases per 100,000 inhabitants in the past seven days) of any region in France, at 655, rising to 830 in the north of the country.

The government-set alert threshold for the incidence rate is 50, with all regions in France currently above this level. On Friday, July 30, the national incidence rate was 224.

The region with the second-highest incidence rate is Provence-Alpes-Côte-d’Azur, at 751.

The regional health agency said on August 3, the number of people hospitalised with Covid-19 had risen by 151 cases since July 27 to 459, with 197 (an increase of 74 cases) in intensive care.

In Corsica, the plan blanc will be in place for at least four weeks.

The island has experienced high numbers of tourists this summer, with more than 130,000 incoming and outgoing travellers having passed through already.

Dr Michel Mozziconacci, president of the Corsican order of doctors, said that the plan blanc had been initiated due to the “urgency of the dramatic situation that we have seen on the island in the past two or three weeks”.

“Hospitals are feeling the pressure and lack staff. We need to free up space to be effective,” he said.

He described hospital staff as feeling “confident” despite the challenges they have faced in the past year and a half. “We will need to put our hands back into the dough (remettre la main à la pâte) and remotivate ourselves,” he said. “We have to stay optimistic.”

In Corsica 60-70% of people have received a first dose of the vaccine, Dr Mozziconacci said.

11 hours ago
4
Has reducing the French speed limit to 80km/h saved lives?