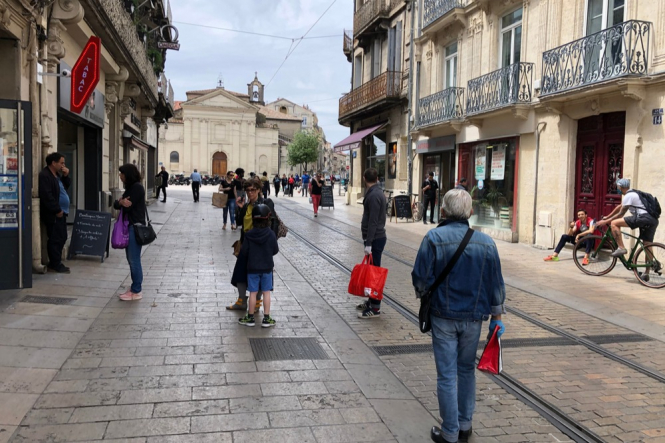 Montpellier is the capital of the department of Hérault, which has the highest rate of Covid-19 cases in Occitanie Pic: Guillaume Garin / Shutterstock

The number of new Covid-19 hospitalisations in the region of Occitanie in the south of France is 10 times higher now than at the end of June, the regional health authority has stated in a message of alert, asking the population to remain vigilant and to get vaccinated.

The average number of hospital admittances over a two-week period has increased to over 300, 10 times more than what it was on June 30, the Agence régionale de santé Occitanie (ARS Occitanie) said.

Occitanie’s increasing hospitalisations come as a new report shows it to be one of the least vaccinated regions in the country.

Using data published by France’s health insurance service Assurance maladie on July 19, health geographer Emmanuel Vigneron mapped the number of people who have had at least one vaccine dose.

The map below shows that Occitanie is one of the least vaccinated regions in France.

Several departments in Occitanie have a lower-than-average vaccination rate but the region has mixed results.

He noted what he called a “triple vaccination fracture” - large disparities in the number of vaccinated people based on geographical, generational and socio-economic factors.

He found that people living rurally, young people and people of lower socio-economic backgrounds were all less likely to be vaccinated.

The situation in Occitanie in numbers

ARS Occitanie reported that the incidence rate - meaning the average number of positive Covid-19 cases per 100,000 people over the past seven days - is 12 times higher than the alert threshold (50) in several of the region’s departments.

“All age groups are concerned, with a very significant impact on the health system. We must react now,” ARS Occitanie wrote in a statement on July 31.

Hover your mouse over the departments in Occitanie in the map below to see the incidence rate in each.

The department of Hérault has the highest incidence rate in the region, at 615 cases per 100,000 people. The national average is 225.

“The health situation continues to deteriorate rapidly in Hérault,” the local health insurance service (Cpam) wrote in a press statement.

“We are confronted with a highly contagious variant, which affects people who are rather young and not yet vaccinated,” it added.

All regions in France have an incidence rate over the government-set alert threshold of 50.

Occitanie’s incidence rate is 427. This is the third-highest rate in mainland France (including Corsica).

Provence-Alpes-Côte d'Azur has a rate of 565 and Corsica has a rate of 646. Mr Vigneron’s map shows that these regions also have a lower-than-average vaccination rate.

ARS Occitanie reported that there was high pressure on intensive care units in the departments of Pyrénées-Orientales, Hérault, Aude and Haute-Garonne.

There are currently 157 people in intensive care units due to Covid-19 in Occitanie, figures from Covidtracker - which uses government data - show.

The rate of positive tests in Occitanie, meaning the percentage of tests that return a positive result out of the total number of Covid tests taken, is 6.1%. The national average is currently 3.91%.

ARS Occitanie called on everyone in the region to take responsibility for slowing the spread of the virus and to continue to respect barrier gestures, wash their hands and maintain social distancing.

“Everyone’s actions can limit and lessen the impact on our health system,” it wrote.

“This is vital to combat the epidemic during this summer period. It is also essential to give the vaccination campaign enough time to reach as far as possible, therefore protecting a maximum proportion of the population.”

ARS Occitanie stated that in the last week of July, 420,000 vaccination doses were administered in the region. This includes 240,000 first injections, which is the equivalent of roughly 5% of the region’s adult population in one week.

Covid rules: When are you required to self-isolate in France?