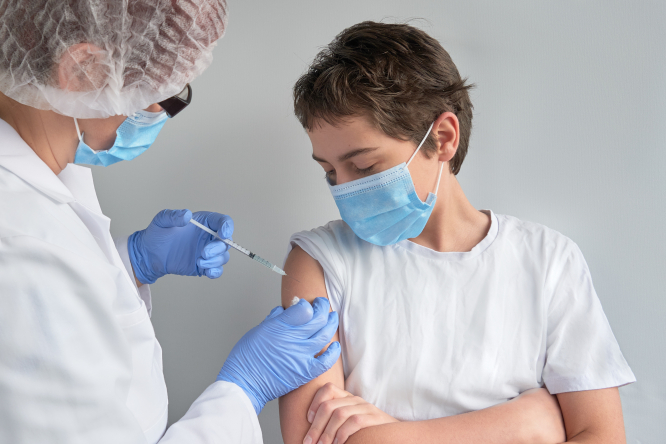 The number of patients being hospitalised due to Covid is continuing to drop in France, with numbers having fallen under 11,000 late last week, as the vaccination campaign continues.

There were 4,248 new hospitalisations in the past seven days, the latest update from Santé publique France shows.

In critical care, where the most severe cases are admitted, cases are dropping more slowly, with 2,217 patients at the last update, down from 2,223 the day before. One week earlier, there had been 2,276 patients.

Numbers in intensive care remain relatively low but stable, varying between 2,200 and 2,300 for the moment. There were 1,022 new admissions to critical care, including 725 in intensive care, over the past seven days.

Prime Minister Jean Castex this weekend warned against “mocking people who are afraid of the vaccine”, saying that while he disagrees with certain messages, people should still “have the right to protest”.

“It’s our responsibility to explain the reality to them. What really causes bad side-effects, is Covid. No vaccination has ever been scrutinised worldwide as much as the vaccines against Covid.”

However, Mr Castex warned that certain messages are not acceptable.

He said: “We absolutely have the right to protest, to be against the vaccine, within a Republic and democracy. But we cannot use these channels to hold anti-Semitic views. We can’t use this to go and set fire to vaccination centres or attack a coffee shop worker because we are anti-vax.

“We can’t book an appointment at a vaccination centre with the intention of causing a delay and ruining doses, especially when there are poor countries that lack doses!”

‘Vaccinating under-12s not a priority’

It comes as Professor Jérôme Salomon, director-general for health, told BFMTV yesterday (Sunday, September 5): “We have 57 million people in France who are eligible for vaccination, and we are getting close to 50 million, so you see, we still have a few million people to convince.

“The biggest priority is the most fragile people.”

He also reiterated that vaccinating under-12s in France is not currently a priority.

He said:  “We are not at all at the point of vaccinating children, for many reasons: Because we lack scientific data, and because studies are still ongoing.

Professor Salomon was outlining the plans as he explained that the country was employing “all the tools” necessary to ensure la rentrée (back to school and work) goes as smoothly as possible.

He said that continued measures such as wearing masks and handwashing were still important and added: “We have the means to ensure that la rentrée goes well, but we must stay vigilant. The more we are vaccinated, the fewer problems we will have.”

His comments chime with those of National Education Minister Jean-Michel Blanquer, who said that vaccinating the youngest in society was “not currently on the agenda”.

Vaccination in France is currently only open to over-12s.

Despite the confirmation, not vaccinating children is one of the key messages seen at the anti-vaxx and anti-health pass protests that have taken place over the past successive weekends across France.

Placards reading “Don’t touch my children (Touche pas à mes enfants)” suggest that some protesters fear that vaccination could soon be rolled out to the under-12s.

Read more: 'Why we were protesting against the French health pass today'

However, there are no plans to do this so far.

Recent data from US health authorities suggest that the Delta variant does not cause more severe cases among children and adolescents, when compared to previous variants.

Walk-in Covid vaccinations at shopping centres in France this weekend

19 hours ago
4
What income must Britons show for a six-month visitor visa for France?