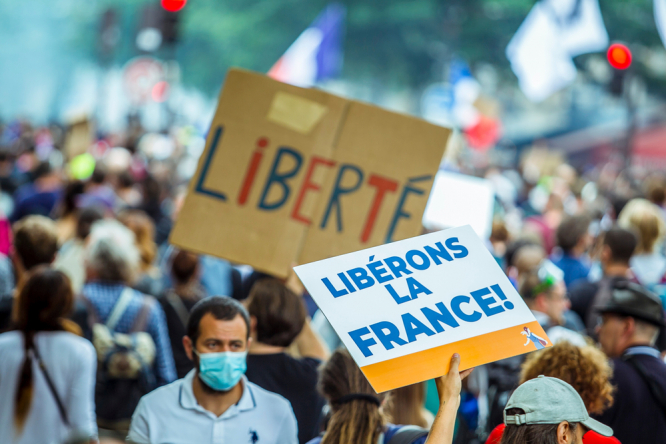 There were 215 official marches across France this weekend, with many attendees calling for ‘freedom’ Pic: Norbu Gyanchung / Shutterstock

More than 141,000 people marched against the health pass this weekend, another drop in numbers on the eighth consecutive Saturday of protests.

There were 215 marches across France, of which five were in Paris, attracting 18,000 people in the capital, according to the Interior Ministry.

As usual, protesters were varied. Many placards denounced an ‘attack on freedom’ and called the health pass ‘veiled mandatory vaccination’.

Attendees appeared to include anti-vaxxers, people who are vaccinated but calling for personal choice, former gilets jaunes, and people from both ends of the political spectrum.

Leader of far-right Les Patriotes party, Florian Phillipot, once again called for a march. He said: “We are boycotting this health pass. This pass will fall. We will go for a general strike if needed.”

A total of 21 people were arrested, including three in Paris. They were taken into police custody in the evening in connection with “alleged “violence and/or outrage on a person with public authority”.

One group separated from an official march in Paris and entered the Halles commercial centre, prompting riot police on motorbikes to arrive and intervene. There was no reported damage to the centre, but shops closed for a time.

Protesters have already said they will hold more marches next weekend.

Pro-vaccination march in Lyon aims to ‘add balance to protests’
'Why we were protesting against the French health pass today'
175,000 march against health pass in France on sixth protest weekend

4 days ago
2
Tour de France 2022 route revealed: will it pass near you in France?

3 days ago
3
Which products are – or could be – hit by stock shortages in France?

2 days ago
4
French vaccines and UK contact cases: ‘it’s absurd we must quarantine’