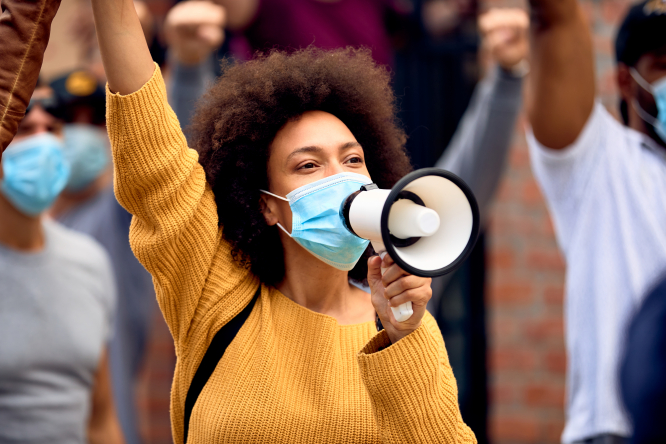 A pro-vaccination march is taking place in Lyon, eastern France today after organisers said they wanted to take a stand, two days after another weekend of anti-health pass demonstrations across the country.

Former journalist and ex-municipal councillor Jacques Boucaud co-organised the pro-vaccination march, to show that the viewpoint “exists” and “for citizens to say, that’s enough”.

It comes after almost 160,000 people marched against the health pass and vaccination rules on Saturday, August 28, in the seventh consecutive weekend of action. There were 222 official protests counted in total.

Mr Boucaud said he was inspired to organise the pro-vaccination march as a result of the anti-health pass movement, which has been present in Lyon, as well as many other cities across the country.

Mr Boucaud told FranceInfo: “Since the beginning of July, we have seen these anti-vaccination protests every Saturday. They make a lot of noise, but are in the minority when you compare the numbers at the protests to the 50million people in France who have had at least one injection.

“Today, we only hear about the [anti-pass] protests, with messages that are terrifying. They talk about ‘resistance’ and ‘dictatorship’, but these words have meaning. Go and talk about resistance and dictatorship to the Afghans.

“It is completely unacceptable to misuse words such as these, and ‘freedom’. That is why we want to unite. The atmosphere that has been created is pretty scary. We decided to make ourselves heard, to show that we are fine with getting vaccinated.

“We want to show that a large part of the population wants to get out of this situation that we’ve been in for a year and half. We understand the scientists and the studies by real specialists who show that the vaccines are the only solution to get us out of this pandemic.”

Mr Boucard said it would be difficult to educate people who are anti-vax or anti-health pass.

He said: “We will not manage to convince everyone. Within this movement, there are anti-vaxxers, people who are anti-health pass, people from the extreme-right, extreme-left...it’s often politicised.

“But our action is a citizens’ movement. When you see the emergence of movements such as ours, we might rightly say to ourselves that political parties have failed. Here, citizens are getting together to say that’s enough, we exist too.”

Mr Boucaud conceded that the health pass added an extra layer of complexity to going out, but he suggested that going out was a privilege that some do not have, and that it was worth it if it meant beating the virus.

He said: “Of course it’s not fun if you don’t have a health pass and you can’t go to a restaurant or a cafe, but not everyone in France can do that anyway, some people don’t have the money.

“We have created such a damaging atmosphere this summer with all this nonsense around the health pass and the vaccines.”

Mr Boucaud also admitted that it could be too late to organise a pro-vaccination protest, but he said: “The main thing is that a maximum of people get vaccinated so that kids can go back to school, so that healthcare workers can do their jobs in less-difficult conditions to those they are experiencing now.”