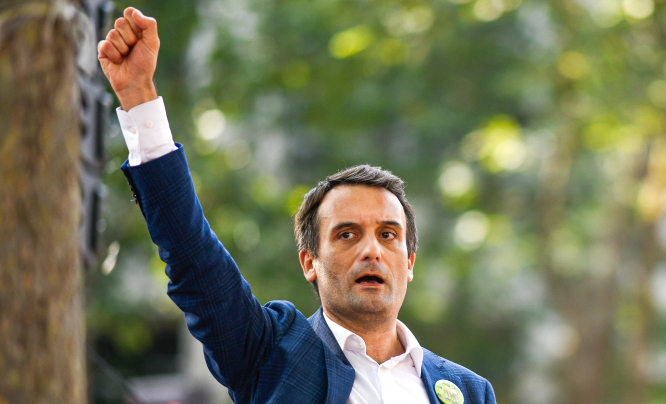 Florian Philippot, head of Les Patriotes party, is one of the people named by Dr Marty as spreading misinformation on Covid-19 Pic: Victor Joly / Shutterstock

Anti-vax leaders of the health pass protests should ‘pay’ for the delay they have caused in the fight against Covid-19, a top French doctor says, as a new poll shows most people disapprove of the cause.

The anti-health pass protests – which last weekend attracted more than 175,000 people across France in the sixth weekend of the movement – have wasted significant time in the fight against the virus, and “we should one day make the leaders of the anti-vax movement pay, Dr Jérôme Marty told FranceInfo.

There could be future “catastrophes” that will “probably” be caused by this delay, he added.

He also criticised the “Facebook algorithm” for its part in spreading false information. He said: “We must explain, explain, and explain again.”

He added that he often meets patients who are reluctant to be vaccinated, but who come out of “desperation”, and he works hard to explain to them “why they need it”.

He said: “Eventually, we manage to make them understand why they need to be vaccinated and why they often have negative ideas about vaccination. It takes time, but we manage it in 90% of cases.

“These patients start out worried; they have a personal history with medicine that is often the underlying reason for this worry. And because they’re worried, they go on the Internet to find information, and often they fall into the trap of conspiracy theories because due to the way the Facebook algorithms work they are only given bad information.”

Dr Marty said that he had received death threats because of his message, and warned that the vandalism of vaccination centres – including at Saint-Orens-de-Gameville near Toulouse last week – showed that “violence is becoming real”.

He said: “We are also seeing a certain number of people who are leaders of the anti-vax movement, with immense conflicts of interest, whether economic or political. They have no interest in ending this crisis. We should have the courage to name them: [Florian] Philippot, [Francis] Lalanne, [Jean-Marie] Bigard.

“There is basically a group of about  10-15 people who stir up trouble and send out fake news. We must one day make them explain themselves and certainly punish them, and make them pay for the time they are making us waste, and probably the catastrophes that they have caused as a result of the delay.”

Mr Marty is also set to make a formal complaint against MP Nicolas Dupont-Aignan, for what he calls “defamatory” tweets.

Mr Dupont-Aignan is a member of the Assemblee Nationale, MP of Essonne, president of right-wing political party Debout La France, and a 2022 Presidential candidate.

On August 21, he tweeted a disputed claim that Professor Didier Raoult, the controversial former head of the IHU Méditerranée Infection in Marseille had been “fired”.

It was announced that Professor Raoult would step down from his position last week, with some claiming that he had been ‘fired’ because of his views on Covid, but others saying that his leaving was a mutually agreed retirement, and had always been planned.

Mr Dupont-Aignan also said that: “Others have thousands of deaths on their conscience, by confining people at home with some Doliprane [paracetamol], and they strut around in the media.” He then used the #Manifs21Aout hashtag, which has been used to show support for the anti-health pass protests.

In response, Dr Marty said: “You have just publicly brought the most serious accusation against our profession with defamatory words. I will therefore have the honour of making a formal complaint against you.

“Don’t think that I will spare you! Over the last few months, we have accepted the kinds of politicians you are, that you spread anti-science, fake news, and obscurantism. Today, you have done more than just insult us, you have attacked us.

“[You’ve suggested] that the doctors that did not apply Professor Raoult’s protocol have thousands of deaths on their conscience. We will demand compensation for each insulted doctor, for each patient that you have weaponised.

“We will not let you get away with it.”

It comes as a new poll has found that more than half of people in France disapprove of the anti-health pass movement.

The Elabe poll for BFMTV found that 54% of the population now disapproves of the anti-health pass protests, and those against the mandatory Covid-19 vaccination for people in 70 healthcare professions.

The results suggest that the feeling against the protests is rising, with this poll showing that disapproval has risen six percentage points in two weeks.

In contrast, just over a third (34%) say that they have sympathy for the movement.

Last weekend, the final Interior Ministry figures showed that there were 175,503 people marching nationwide, a drop of almost 40,000 compared to the previous weekend, and 60,000 fewer than the numbers seen on Saturday August 7.

175,000 march against health pass in France on sixth protest weekend