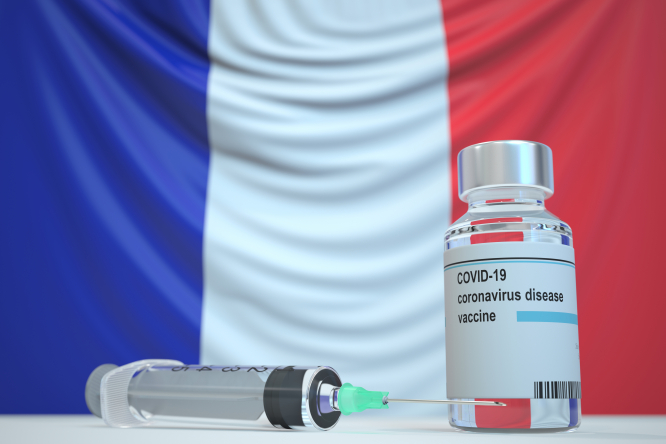 France has caught up with its European neighbours when it comes to the percentage of people having had at least one Covid-19 vaccine injection Pic: Novikov Aleksey / Shutterstock

France has fully vaccinated more than 40million people, the equivalent of 59.6% of the eligible adult population, and 46.9million have had at least one jab (69.6%) the government has confirmed.

Prime Minister Jean Castex announced the target had been hit, in a tweet.

In total, 40.1million people have now been fully vaccinated in France with all doses required to achieve full coverage. Overall, 46.9million have received at least one injection, equivalent to 69.6% of the total eligible population.

However, the official figure of 59.6% given by France's CovidTracker website differs from data of the renowned website Our World in Data, which gives a figure of 53.57% for the number of fully vaccinated people in France.

The latter website (which is updated to August 17) puts France in 17th place on the share of European populations fully vaccinated against Covid-19.

European countries ahead of France for percentage fully vaccinated (According to Our World In Data), to August 17, are:

Fully vaccinated by age in France

By age group, those aged 70-79 are the most vaccinated in France, with 91.7% fully vaccinated.

Age percentages are as follows (figures from Le Monde via Santé publique France):

France is doing especially well in terms of the percentage of people given at least one injection.

France is now aiming for 50million people to have received at least one injection by the end of August. This will mean 3.5million people will need to get their first injection in the next two weeks.

The government maintains that this is an achievable aim, especially if its predicted “rebound” in the number of people booking happens, once people start returning home from holidays.

How has France caught up?

After long being criticised for the slow speed of its vaccination rollout, France has now caught up with its European neighbours. But how?

President Emmanuel Macron’s speech on July 12 appears to have boosted vaccination numbers, with the introduction of new health pass restrictions.

Philippe Amouyel, professor of public health at the Lille University Hospital, told Le Figaro: “It should be remembered that we had a fairly good rate of vaccination until the end of May, but as soon as the lifting of the restriction measures was mentioned, this slowed down some people’s motivation.

“They saw this deconfinement as a reassuring message that made them put off vaccination until later. So we had to find a way to motivate the population, and the health pass obviously had the desired effect.”

After a temporary boost, vaccination numbers have dropped for the second consecutive week.

The number of appointments made on website Doctolib has dropped from 150,000 on average per day to 100,000, its data shows. Yet, the Health Ministry has sought to play down the drop, saying that these numbers still show a “large number of people in France  who are willing to get vaccinated.”

Yet, the number of hospitalisations in critical care units, including intensive care, in France has now passed the 2,000 threshold, the most recent figures from health body Santé publique France show.

There were 28,405 cases of the virus confirmed in the same previous 24 hours.

Professor Amouyel added: “We will have to wait for a higher level of vaccination coverage if we want to avoid having to put more restrictive measures back into place.”

Even as vaccination coverage climbs higher, some experts are predicting that the Delta variant could continue to cause problems.

Mircea Sofonea, specialist in epidemiology of infectious diseases at the University of Montpellier, told Le Figaro: “The Delta variant has changed the playing field, and shows that the vaccine alone cannot control the epidemic.

“Back to school is coming, and children are the least-vaccinated population. We do not have enough perspective on the Delta variant in a school context.”

How do France’s Covid vaccine numbers compare with rest of Europe?

5 million eligible for Covid booster in France - how do they get it?