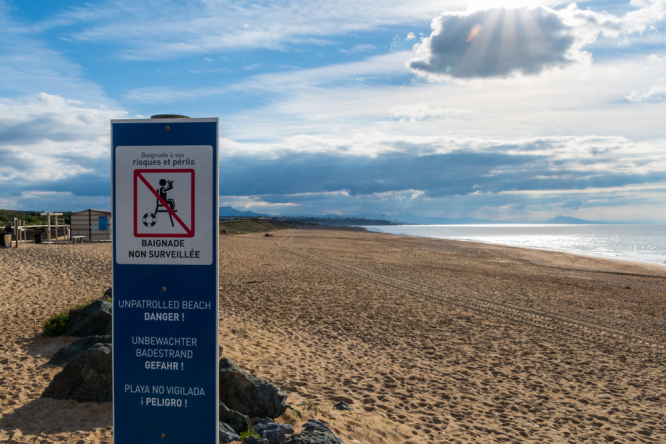 Signs are being put up to raise awareness about how baïnes work and what to do if you are caught in a current Pic: HJBC / Shutterstock

Signs have gone up along the coast in Charente-Maritime, Nouvelle Aquitaine, warning of the dangers of swimming and surfing in the sea this summer.

Calm looking patches of water known as baïnes are common along the Atlantic coast and can be dangerous to swim in.

Baïnes (originally meaning ‘little baths’) are basins of water that form next to the coast, bordered on one side by the beach and by sandbanks on other sides.

They become dangerous when covered by the tide, as on the surface the waters inside the baïne look calm but there are currents underneath which can quickly pull swimmers and surfers out into deeper waters.

The results can be fatal.

On May 30 2020, two teenagers from Limousin drowned after swimming off Tremblade beach and being swept out to sea.

Advice for swimmers and surfers

Signs are being put up along the coast in Charente-Maritime to raise awareness about how baïnes work and what to do if you are caught in a current.

Advice for people swept out to sea from a baïne is to avoid swimming against the current, as doing so will cause exhaustion and increase the likelihood of drowning.

Baptiste Dalmon, town councillor in Saint-Trojan and former lifeguard told France 3: “You need to try and remain calm. Fear, which we call aqua stress, is a major factor in drowning.”

Instead of swimming against the tide, you should use arm movements to alert people on land.

If possible, you can also move towards the edge of the current to exit as the waters on either side of the baïne should be calmer, as the infographic posted by the Gendarmerie de la Charente-Maritime shows.