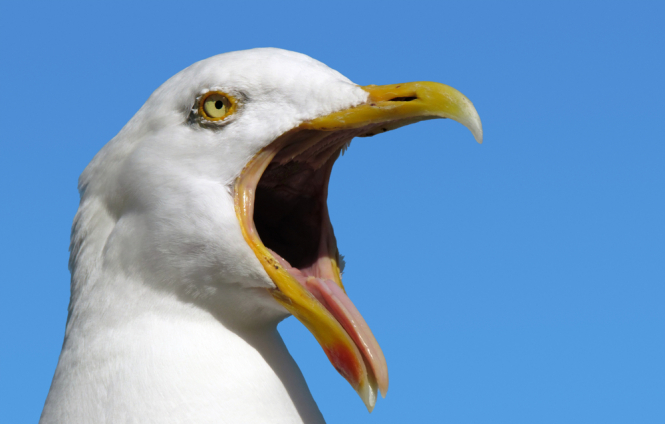 A seagull rummaged around in a young woman's handbag and flew off with her haute-couture wallet while its victim was having lunch with a friend.

The unusual aerial crime took place in Monaco’s Trocadero Gardens. The schoolgirl said she and her friend had been more concerned about their sandwiches than their bags, which were on the floor between them.

She watched incredulously as the seagull flew up to a nearby roof, and deposited her wallet there. When Monaco's fire service came to the girl's rescue and climbed up to the roof to reclaim her wallet, they found a collection of valuable objects in the gull's nest.

While the schoolgirl was able to see the funny side, it is just the latest in a series of similar stories. Seagulls have become something of a menace in coastal regions of France. In Toulon, Var, noisy and aggressive gulls have prompted complaints from residents, and forced local authorities to take action.

The prefect granted permission for the town to sterilise eggs in gulls' nests but too late to do anything this year. The operation, carried out by specialists under the supervision of the Ligue pour la protection des oiseaux (LPO) will begin with 30 or so nests next year, rising to about 50 by 2023.

A similar operation took place in Cherbourg-en-Cotentin, Manche, earlier this year. The eggs are coated with vegetable oil, which stops the embryo from developing, and left in the nest. Because the eggs are not broken, the birds try to hatch them, rather than attempt to lay new ones.

Meanwhile, drones are being used to monitor gull numbers in Lorient, Morbihan - where one man was attacked by the birds in December 2020, and now refuses to leave his home without a helmet.

But this method of monitoring and sterilisation is not without its risks. The birds will attack drones that fly too close to their nests.

During the first lockdown in France, many people noticed animals returning to claim back areas usually dominated by humans. One photographer in Nice took these shots of a seagull nesting on the beach near the Promenade des Anglais - which would usually have been filled with people.