EU Covid health pass approved for travel use from July 1 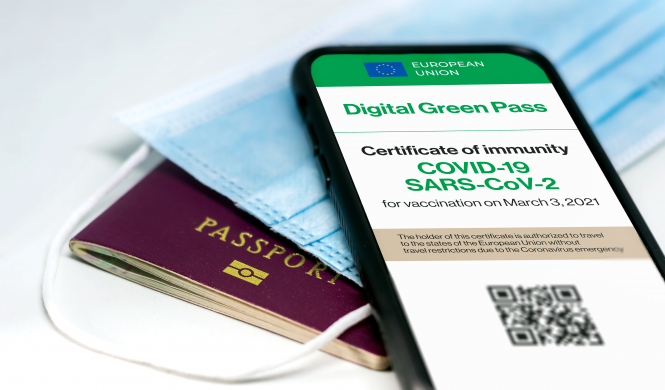 The pass will be available in digital format, as a scannable QR code, and also as a paper document Pic: Rarrarorro / Shutterstock

Members of the European Parliament and the 27 EU member states have reached an agreement meaning that the EU digital green certificate should be authorised for use for summer travel from July 1.

The certificate is known as a pass sanitaire (health pass) in France, and it will enable travellers who can show they do not have Covid-19 to move freely between EU countries.

President of the European Commission Ursula von der Leyen said that the pass would be a “key element on the path to resuming safe and easy travel throughout the EU”.

The digital version contains a scannable QR code with information about the bearer’s health status, for example showing that they have been vaccinated against Covid-19, they have a negative result from a PCR test taken within the previous 72 hours or that they have immunity after recently being infected with - and fully recovered from - Covid-19.

A paper version of the certificate will also be available.

Negotiations stuck on quarantines and cost of tests

The initial proposal for a health pass was largely approved at the end of April by the European Parliament.

One sticking point was the cost of PCR tests, with both Parliament and the Council pushing for tests to be free throughout the EU. The final agreement states that they should be “affordable and accessible”, meaning travellers may have to pay for tests in some countries.

However, the European Commission has agreed to put €100 million towards funding tests to make them more affordable, with an additional €100 million available if needed.

People in the French health system will also be eligible for reimbursements from Assurance maladie for PCR tests that they have had to pay for in other countries while travelling.

Read more: How to claim back money in France for a Covid test taken abroad

Another discussion point was whether member states would be able to impose extra health restrictions on travellers who had entered the country using a health pass.

In the end it was agreed that when the pass comes into use, member states should avoid “imposing extra travel restrictions” such as additional tests or quarantines, unless they are “necessary and proportionate” for public health.

The final agreement is expected to be approved at the next meeting of the European Parliament scheduled for June 7-10.

PCR tests to be free for tourists visiting France this summer

Can I visit France from UK without having booked accommodation?