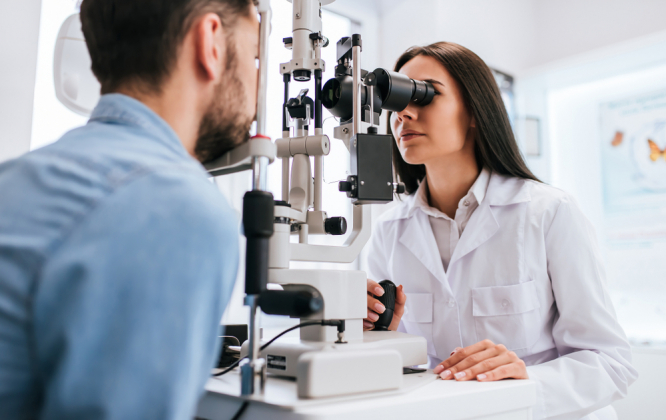 Brittany has seen the greatest reduction in waiting times to see ophthalmologists in France, going from an average of 126 days in 2019 to just 29 days in 2021 Pic: 4 PM production / Shutterstock

Reforms to the organisation of eye care in France have reduced waiting times for appointments with eye doctors (ophthalmologist) by 16 days in the past two years, the syndicat national des ophtalmologistes de France (SNOF) has found.

In 2019, patients would have to wait an average of 42 days to see an ophthalmologist. That has now been reduced to an average of 26 days.

This improvement is due to better coordination and collaboration between eye doctors, orthoptists (experts in diagnosing and treating defects in eye movements) and opticians. Orthoptists and opticiens are now allowed to renew prescriptions, for example, which cuts down congestion at ophthalmologist’ surgeries.

In addition, the draft bill on the financing of social security for 2022 allows for orthoptists to prescribe glasses or contact lenses without going through an ophthalmologist, something the SNOF is opposed to.

The average waiting time differs per region in France.

Brittany has seen the greatest reduction in waiting times to see ophthalmologists, going from an average of 126 days in 2019 to just 29 days in 2021.

Normandy has also seen a drastic decrease, going from 135 days to 65 days in the same period.

In Centre-Val de Loire, the waiting time has dropped from 83 days to 41 days.

Inhabitants in Ile-de-France, meanwhile, can expect to wait an average of 16 days to get an appointment with an ophthalmologist.

The average wait in Auvergne-Rhône-Alpes and Provence-Alpes-Côte d'Azur is now 27 days.

However, the waiting period has increased by two weeks in Bourgogne-Franche-Comté to 44 days on average, and by 20 days in Corsica to 59 days on average.

The type of consultation is also a factor, with waiting times generally shorter throughout France for an urgent consultation with an ophthalmologist. The longest waiting period for emergency appointments is in Normandy, with patients having to wait around 25 days, two days fewer than in 2019.

A one-year trial is being run in the department of Aisne (Hauts-de-France) offering patients online consultations with an ophthalmologist.

Point Vision, a national network of ophthalmology centres, opened a specialist centre in a hospital in Saint-Quentin back in June where ophthalmologists can carry out online consultations.

In Saint-Quentin, it takes six months on average to get an appointment with a specialist, which is why the town was chosen as a test case by the National Health Insurance Fund (CNAM).

The online consultations have brought down the waiting period to three weeks.

The local CPAM reimburses the consultations, which are available only to the patients whose doctor is involved in the trial, with the centre located at the Saint Claude-Elsan private hospital.

François Pelen, co-founder of Point Vision, said that if a more thorough examination is required after the online consultation, the patients are able to attend the centre in person.

"Our intention is to open two or three advanced teleconsultation stations in each of our major centres,” Mr Pelen said. Point Vision has 40 ophthalmology practices around France.

The president of the SNOF, Dr Thierry Bour, remains sceptical about the trial.

"It should be seen as a complement [to regular check ups] and not as an end in itself," he told Franceinfo on September 20.

The number of eye care specialists in France has decreased by 5.4% since 2007, French medical news site What's Up Doc reports.

This is due to the fact that many ophthalmologists are retiring without being replaced.

"The aim of our project is to work in medical deserts where no young doctors can be found to replace those who are leaving," Mr Pelen said.