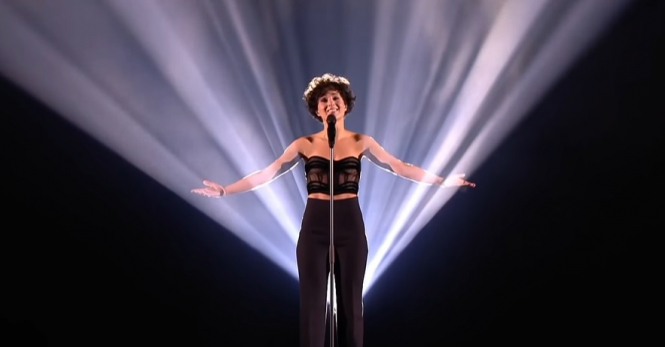 Ms Pravi delivered an emotional performance of her song Voilà at last night’s (May 22) live Grand Final at the Ahoy arena in Rotterdam, Netherlands.

The secretary of the Barbara Pravi fan club in France who was present at the show told FranceInfo: “Barbara was an excellent choice. We were all behind her...I was in the arena, there was nothing else to say. It was magnificent.

“It was our culture; that was the image of France that we wanted to show when abroad, and we are totally satisfied.”

Another fan, Fabrice, from Hauts-de-France, said: “I was jumping on my chair and the tension was mad. I am very happy.”

His friend Thibaut agreed: “It’s really good. We’re really happy. Second place doesn’t happen every day. We've been in the doldrums for so long, but now we’ve come back. We could have been 26th.”

For a time, France was battling for first place with Switzerland, whose artist Gjon’s Tears eventually came in third with 432 points for his song, Tout l’univers.

A surprise late addition of 318 points from the public vote pushed Italian band Måneskin to the top spot, with 524 points overall, for their rock song Zitti e buoni.

Pravi sang in French, for a low-key yet emotional performance, with overtones of Edith Piaf. She wore a simple outfit of black trousers and a black bustier, and the staging was minimal; in contrast to some of the more elaborate and colourful sets of other acts.

She told FranceInfo: “To come in first is not something you expect, so obviously, when I was so close, I started to tremble and think: ‘Maybe it’s me, maybe it’s me.’ But to come in second, I am thrilled.

The head of the French delegation, Alexandra Redde-Amiel, said: “We came in second for the first time in 30 years. I think we need to appreciate that. I think we are all happy and so proud of the work that has been done; so proud of Barbara [Pravi]’s performance. I have no regrets.”

Pravi was beaten only by Italy, which will now host the 66th edition of the contest next year.

The live staging of the contest - which was cancelled last year due to Covid-19 - was a ‘test event’, and took place as part of the Fieldlab Events research programme, under the supervision of professors and scientists from the Delft University of Technology and Breda University of Applied Sciences.

All attendees, performers, crew, press and other participants were required to test negative for the virus every 48 hours during the rehearsal and finals schedule, and adhere to a series of other strict health requirements.

Attendees were required, among other rules, to show proof of a negative test from the previous 24 hours, and were required to wear masks when not at their seats. They were also ‘triaged’ via a special app, which asked them questions and screened anyone for possible symptoms of Covid.

The arena also held just 3,500 people - around 20% of its total capacity - and tickets were only available to people who had booked for 2020.

There were no associated ‘official’ Eurovision parties this year, and most press attendees followed the contest from home via the online press centre.

This year, the top three songs were all in languages other than English; with Italy’s entry singing in Italian, and France and Switzerland’s artists both singing in French.

And while Italy, France, and Switzerland triumphed; Germany, Spain, and the Netherlands received no points at all from the public vote.

Even worse, the UK finished the contest in last place with ‘nul points’, having received no votes from the jury nor the public, making it the only country out of 26 to finish on zero.