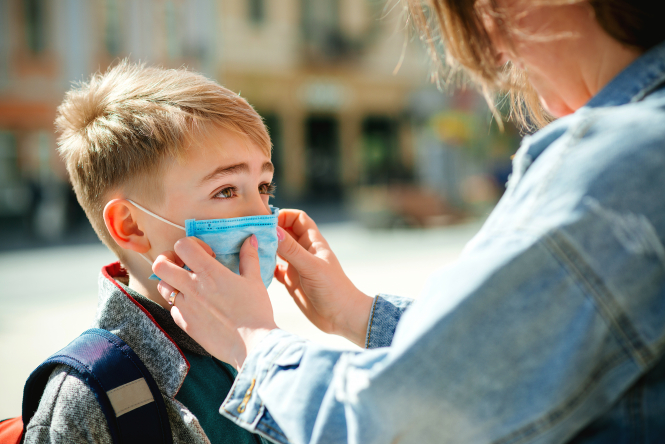 The Institut Pasteur modelling shows that children could be at particular risk during another possible Covid wave Pic: Volurol / Shutterstock

Current vaccination rates in France may not be enough to avoid a possible future wave of Covid, and could lead to thousands of hospitalisations per day and further lockdown measures in winter, the Institut Pasteur has warned.

New models from the Paris institute, published on September 6, suggest that vaccination levels may not be enough to combat a more dangerous and contagious strain of the virus.

This could cause a peak of as many as 5,200 hospitalisations per day – far higher than in the first and second waves – if all restrictions are lifted completely, the modelling suggests.

Dr Simon Cauchemez, a modeller at the Institut Pasteur and a member of government advisory body le Conseil Scientifique, told Le Monde: “We can hope that it passes, but we must be alert and vigilant. If we see that [the epidemic] looks as though it will ‘explode’ more than planned, we must be able to react quickly to break the spread.”

This could include extra restrictions come winter, he added.

Commenting on the study’s findings, he said: “This considerable impact may seem surprising, but during the first wave, we estimate that 5% of people in France were infected – and probably less among the most fragile, who have fewer contacts.

“And this was already enough to overwhelm the health system. Even with vaccination coverage of 90% among older people, this still means there will be 10% vulnerable people, which is three times’ as many as the population that was infected during the first wave.”

He said that the effect would be particularly magnified because the Delta variant increases the risk of hospitalisation by 50%, compared to the Alpha variant, which itself is more dangerous than the original strain of the virus.

Despite relatively high coverage in France, the vaccination coverage is still insufficient to face up to this possible new wave, especially as vaccination does not offer 100% certainty against infection.

The Institut Pasteur models suggest that people aged over 60 (3% of the population) could represent 43% of hospitalisations.

The models also suggest that children and teenagers (22% of the population) could be more at risk, accounting for up to 33% of new infections.

Vaccination for children and teenagers aged 12-17 has been permitted in France since June 15, and take-up has been considerable, with 50% now fully vaccinated, and 65% having had at least one dose.

Young people in this age group will be required to show a health pass for access to public places from September 30.

But the authors of the new study suggest that the “situation for children is particularly worrying”, and say that any such new wave could cause problems for schools.

They said: “The low vaccination coverage among children puts them at risk of class closures, with possibly damaging effects on their education and mental health.”

There are currently no plans to vaccinate children under 12 in France.

While most infections among young people are mild, a large number of infections could see more children admitted to paediatric wards, with new variants appearing to increase the possibility.

France is still completing modelisations on the risk, with epidemiologists in other countries are starting to raise the alarm. In the US, a study found that between 25-50% of primary school pupils could be contaminated during the first three months of school, even if they were wearing masks.

The rapidity of the spread depends on a number of factors, such as the percentage of the population that is vaccinated, and restrictions in place outside of the school.

Among the general population, the Institut Pasteur models suggest that a reduction of 20-30% in levels of transmission of the virus (known as the ‘R’ number) could be enough to keep any future wave of the epidemic below levels seen in March and November 2020.

An R number under 1 means the virus is not spreading; anything over 1 means it is.

Dr Cauchemez said: “With all the current measures, we can expect that the reduction will be sufficient.” He added that lockdowns during the first waves of the virus permitted a transmission reduction of 70-80%.

He explained: “The biggest area of uncertainty is the starting point. In our scenario, we have used a hypothesis of an R number of 5, but other modellers say that is optimistic, and use a value of 6.”

Covid France: More research needed before under 12s are vaccinated

2 days ago
4
Shortages of goods in France: What is expected in the months to come?