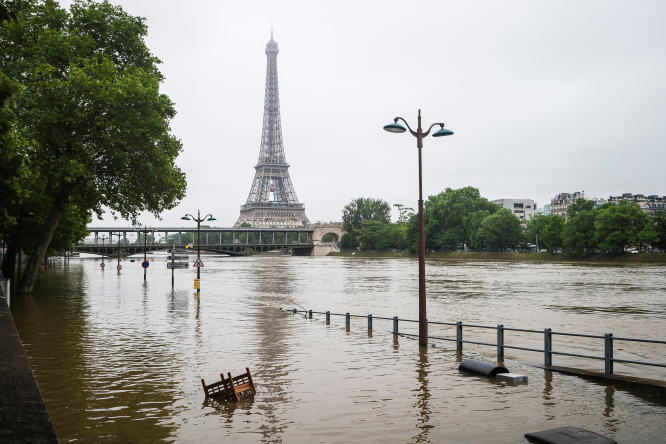 Paris is to experience more extreme weather such as floods, heatwaves, drought, and storms due to the effect of climate change, a new study released by the Mairie de Paris claims.

Rising temperatures mean that incidences of snow, ice and big freezes will go down in the capital, the study conducted by Danish advisory group Ramboll found. But hotter weather also poses the greatest risk overall, and temperatures in Paris are expected to rise year on year.

This could mean recurring heatwaves, “which could be more frequent but also more extreme and longer lasting”.

Heatwaves have already increased in frequency in Paris in the past 20 years.

These high temperatures are amplified in the centre of the city, due to high population density causing a “small island of urban heat” that is particularly intense in northern Paris.

The medical side effects of heatwaves include heat stroke, dehydration, and heart problems, and are considered a major health risk.

Infrastructure could also be impacted, for example if more people use air conditioning, putting the electricity network under increased pressure.

Deputy mayor for forward planning, Célia Blauel, told Le Monde that the study proved that reducing concrete and increasing green space in Paris was “an emergency”.

She said: “We have already acted by greening numerous spaces and increasing accessible ‘cool islands’ when it is hot, such as swimming pools. The next revision of the local urbanisation plan will be an opportunity to increase these acts.”

The study also investigated the possible consequences of large scale flooding in the capital, estimating that more than half of the metro network and most bridges would have to close, and 450,000 homes and 100,000 businesses could be flooded.

This would mean the only way to cross from one side of the city to the other would be by using the périphérique ring road.

The electricity network could be impacted, as would heating systems that provide heat to 20% of homes in the capital.

Getting this system back online could take months.

Hospitals could find themselves largely underwater, reducing capacity to 40% and access to drinking water would be reduced as some water treatment facilities are in flood zones.

The study forecast that a return to normality after such a flood would take “at least five years”.

Preparations for flood protections are already underway in the capital. Water storage units that could hold excess water from the river Seine and reduce flooding zones have opened in Yonne and Seine-et-Marne.

The Mairie said that in Paris: “We are working to ‘un-waterproof’ the ground surface, which should reduce the risk of flooding.”

However, current measures would not provide sufficient protection if a flood were to occur this winter.

Loss of biodiversity also a risk

The study also investigated the loss of biodiversity in Paris, as animals such as birds are in decline, with some species at risk of disappearing.

In lle-de-France, the number of sparrows has fallen by 73% in 15 years, l’Agence Régionale de la Biodiversité reported in 2019.

The potential impact of there being fewer types of plants and wildlife in the capital is unclear, but there are suggestions it could cause a rise in chronic illness, infectious diseases and associated epidemics.

Mayor Anne Hidalgo has previously promised to plant 170,000 trees and to grow “urban forests” in the capital, but the study said the problem was more urgent.

“This should not be pushed back to the horizon of 2050, or the end of the century,” it said.

Paris threatened by ‘once-in-a-century’ floods
The French capital has historically been at risk of severe flooding, even before climate change became a factor.

Experts have predicted that Paris is due its centennial ‘once-in-a-century’ flood, the last of which occurred in 1910. This was considered the worst flood in the capital since 1658.

At that time, the waters of the Seine rose eight metres above the usual level.

In 2013, Serge Garrigues, who at that time oversaw the Paris and Ile-de-France zone at the Préfecture de Police, told Le Monde: “We will have the flood of the century. It’s certain. The only thing we don’t know is when.

“The maximum flood will last between 10 and 20 days, during which we will be able to do nothing, just survive. Things will not return to normal for at least 45 days.”

A 2014 report found that as many as five million people could have their lives disrupted by the next big flood, with 8% of properties in Ile-de-France potentially affected.

In 2018, Paris was hit by a flash flood after a shock hailstorm hit in May that year. Metro stations flooded ankle-deep and torrents of water ran down stairs and streets.

A quirk of Paris floods is that the official depth of the Seine is measured not from the river bed, but from a point on the pont Austerlitz.

Parisians also have their own unofficial marker – the ‘Le Zouave’ statue on the Pont de l'Alma.

What other cities are at risk of climate change-related flooding?

A report in 2018 by Newcastle University found that a number of major European cities are at risk of flooding and rising water levels due to climate change, from 2050-2100 and beyond.

Those at risk included London and Paris, while those at most-risk were Glasgow, Dublin, Helsinki, Riga, Vilnius and Zagreb.

Stockholm and Rome were most at-risk of an increase in the number of heatwave days, while Prague and Vienna were most likely to see the greatest increase in maximum temperatures during heatwave episodes.

Lisbon and Madrid were most at-risk for drought, while Athens, Nicosia, Valletta and Sofia were found to be at risk of experiencing the worst increases in both drought and heatwaves.

The lead author, Selma Guerreiro, told The Guardian: “Although southern European regions are adapted to cope with droughts, this level of change could be beyond breaking point.

“Furthermore, most cities have considerable changes in more than one hazard, which highlights the substantial challenge cities face in managing climate risks.”