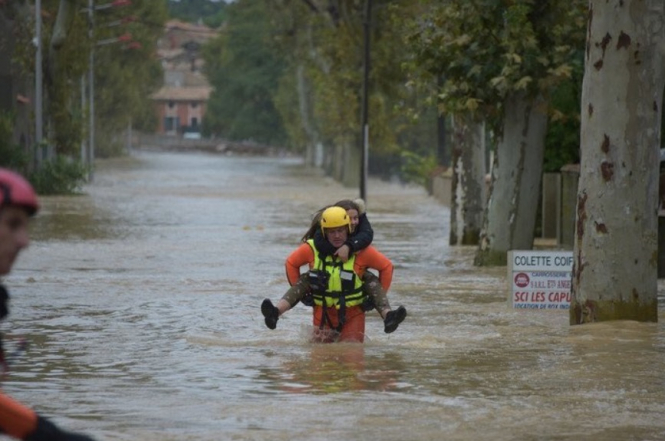 Frédéric de Lanouvelle, spokesperson for the minister of the Interior, made the comments as conditions remain dangerous in the department.

At least 11 people have been confirmed dead and three reported missing, while eight others have been reported badly injured.

This means that residents may now be able to claim for their homes and businesses on pre-existing flooding insurance, under the “catastrophe naturelle” regulation.

The night of the flooding - from Sunday October 14 to Monday October 15 - the Aude department was placed on Météo France “red alert” (the highest possible) at 6h.

This was the earliest that the extent of the flooding became apparent, according to reports. The department had previously been on “orange alert” for rain and storms.

At the time of writing, the red alert for the Aude department remains in place for flooding, with the “Vigicrues” flood warning also at red (maximum).

Yet, Mr de Lanouvelle suggested that the first red alert had come “too late”, and that the alert level just below red (“orange”), was used so frequently that people “no longer take notice” and were not aware of how quickly a situation could escalate.

He said: “It is clear that there is a weakness when it comes to the “orange” alert. We saw it when snow fell in Ile-de-France several months ago. It is used very often, so that when there is a real problem, people no longer take notice.”

The spokesperson admitted that it was very difficult to predict such phenomena, and this added to the issue.

He said: “I do not think this points to any incompetence at Météo France, but to the difficulty of evaluating [this situation]. And this phenomenon is very powerful. It is clear that the emergency services were deployed as soon as possible, but that their working conditions were very difficult.”

Similarly, on Monday, Prime Minister Edouard Philippe said: “When [an alert] changes from orange to red in the middle of the night...it is very difficult to spread the information at 2h. When the alert is on ‘orange’, people do not necessarily say to themselves, ‘it will definitely increase to ‘red’’.”

Over 2,000 homes are without power, and schools and workplaces remain closed. Most roads in the department are closed, especially between Narbonne and Carcassonne.

President Emmanuel Macron is due to visit the department today, while the president of the department, André Viola, has called for a “Marshall plan” to be put in place, to help the region rebuild and repair.

Although water levels are at the highest point since 1891, similar phenomena are not unprecedented in the region at this time of year. They are often called "épisodes méditerranéens" or "orages cévenols", caused by humid air rising from the Mediterranean sea.

More rain is forecast in the area and around the Mediterranean coast; but conditions are fairly warm and dry across the rest of the country.

The surrounding departments of the Aveyron, Hérault, and the Pyrénées-Orientales are on “yellow” alert for flooding - the second-lowest level, which advises people to stay alert if they are taking part in activities that are particularly sensitive to weather conditions.

Over 10,000 homes in these departments had been without electricity, but reports say that most residents have now been reconnected.