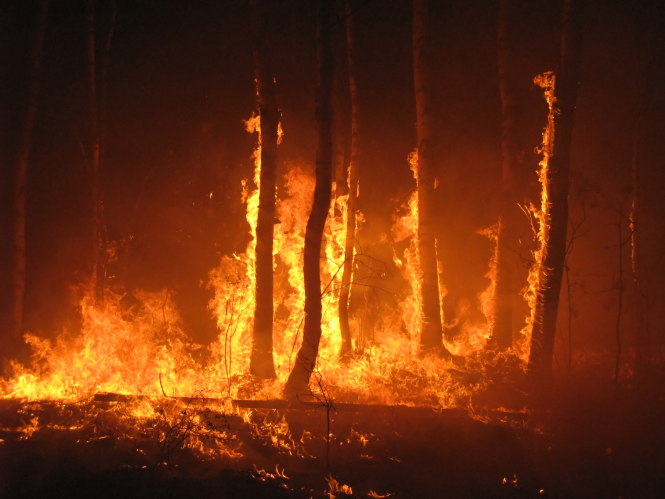 A forest fire that began in the Var on Monday, August 16 is still alight and is thought to be of human origin Pic: Evgeny Dubinchuk / Shutterstock

[Update August 18, 2021 at 10:55: a person has been found dead in a burned house following the movement of the fire towards the village of Grimaud. The death is believed to have been caused by the fire, although this has not been confirmed. A 32-year-old woman has also been reported missing, her family and friends saying that they have not heard from her since Monday evening.]

[Update August 18 2021 at 16:00: A second body has been discovered at the same house in Grimaud. Var's prefecture has also reported that 26 people have sustained minor injuries, including five firefighters.]

More than 1,100 firefighters are still fighting a forest fire – the most serious of 2021 – in the back country near Saint-Tropez.

The blaze began at a rest area (the Aire de Sigues) on the A57 motorway near Gonfaron in the Var at around 17:45 on Monday.

Var’s préfecture said this morning that the evacuated people must under no circumstances return to their homes or holiday sites, staying instead in the safe spaces made available to them.

A visit from President Emmanuel Macron

On Tuesday afternoon, the President of the Republic, Emmanuel Macron, visited Var, paying tribute to the “bravery” of the hundreds of emergency service workers whose efforts have meant that “the worst has been avoided.”

The fight against the flames continues

At 07:00 this morning, firefighting planes and helicopters were once again deployed to tackle the blaze.

Around 08:00, the wind began to pick up again, creating unfavourable conditions for the fight against the flames.

Access to the forest plains of the Var is still strictly forbidden today (August 18), with the risk of a fire still being classed as “very severe.”

The emergency services ask that people in the area abide by safety instructions, taking care not to block access roads and to avoid driving around the Gulf of Saint-Tropez if possible, so as not to hold up emergency vehicles.

A potentially catastrophic event for the rare Hermann’s tortoise

The Var forest fire has caused great damage to natural environments across the Massif des Maures, but experts are particularly concerned for the welfare of a protected species of tortoise.

Hermann’s tortoises are small to medium-sized, with distinctive black and yellow patterning on their shells.

In France, Hermann’s tortoises can only be found in Corsica and in Var, where 15,000 are thought to live.

Some tortoises have already been rescued from the flames, and it is hoped that others will have escaped by burying themselves underground.

However, the full toll of the fire cannot yet be known.

Thousands evacuated as fire rages over 5,000 hectares near St Tropez