Thousands evacuated as fire rages over 5,000 hectares near St Tropez 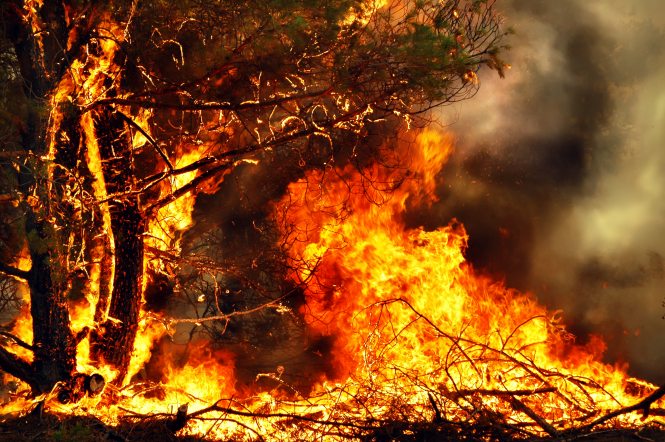 A forest fire has spread over 5,000 hectares near St Tropez in the south east of France Pic: Stock Image / Shutterstock

[Update August 18, 2021 at 09:35 - please see our article for further information on the fire from Wednesday morning.]

Thousands of holidaymakers had to be evacuated from campsites overnight as a forest fire which is still burning travelled through 24kms burning 5,000 hectares of land in the backcountry of Saint-Tropez in southeast France.

Residents had to leave too and around 100 homes are said to have been hit by the fire.

Three people have suffered minor injuries because of the fire and 19 people are experiencing the effects of smoke inhalation, said Var's préfet, Evence Richard, while speaking to France Bleu Provence radio station around 09:30 this morning.

Local emergency services say the blaze spread rapidly because of the wind and the dryness of the ground, despite preventative measures being in place.

Four roads were closed as the fire continued to rage. At 20:30 last night, 13 firefighting planes and helicopters were deployed to tackle the flames.

By 02:00 this morning, thousands of holidaymakers had been evacuated from multiple campsites as a precaution. One campsite, Le Camping Charlemagne in Grimaud, has been completely destroyed.

A number of local residents have also been evacuated from their homes. The emergency services are now urging all those concerned not to return to their house or campsite, but to stay instead in the spaces provided for them in nearby towns.

By 02:30, the fire had moved over the RD98 road and was spreading along the Cavalaire ridgeline towards the town of Cavalaire and the neighbouring village of La Croix-Valmer.

At 10:00, 900 firefighters were still working to tackle the blaze. Its smoke could be smelt 40km away in Fréjus.

Four Canadair firefighting planes and a Super Puma helicopter have now been redeployed to dampen the flames.

The emergency services ask that people in the area abide by safety instructions, taking care not to block access roads and to avoid driving around the Gulf of Saint-Tropez if possible, so as not to hold up emergency vehicles.

Local residents should shut themselves inside their houses if they see the fire approaching, placing damp cloths around doors and windows to stop the smoke from entering.

If it does enter, they should crawl along the ground towards a safe place.

La Croix-Valmer has now opened its town hall to people from Grimaud and Cogolin who are as yet unable to go home, and Cavalaire-sur-Mer is preparing a similar space.

Although 5,000 hectares have been covered by the flames, the full extent of the damage is not yet known. At this time, the fire is not believed to be the result of arson, although specialist police officers are continuing to investigate the cause of the flames.

All 25 forests of the Bouches-du-Rhône department have been closed to the public today (August 17) along with the Toulon mountain plains as a precaution.