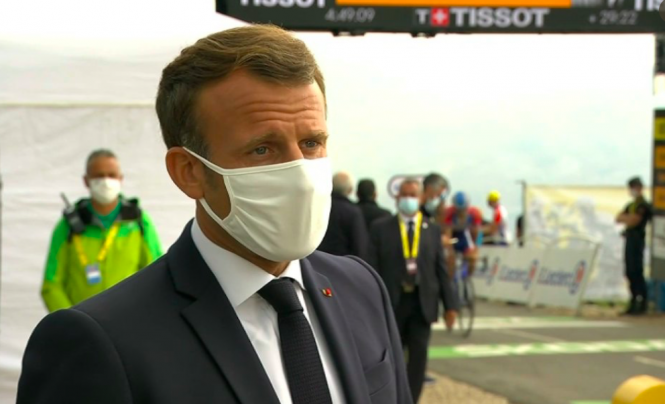 President Macron wore a mask as he attended the 17th stage of the Tour de France yesterday in Méribel (Auvergne-Rhône-Alpes).
By Joanna York

The latest figures were released by health body Santé Publique France (SPF) yesterday evening. They give a summary of the 24 hours prior to their release in France.

The figures show there were:

However, the rate of positivity, which measures the percentage of Covid-19 tests that come back positive, has remained stable at 5.4%, despite increases in cases, clusters and hospitalisations.

Fewer than 100 schools closed in France

Education minister Jean-Michel Blanquer said yesterday (September 16) that 81 schools in France and 2,100 classes are currently closed due to Covid-19. With around 60,000 schools in total, he said this means “around 0.13%” are affected.

This does represent a rise in closures since the beginning of the month. On September 7, Mr Blanquer said that 28 schools and 262 classes had been closed, with classes being closed as soon as three or more cases are found.

Health minister Olivier Véran will start giving weekly press conferences on the health situation in France, similar to those given daily at the height of the health crisis earlier this year.

Government spokesperson Gabriel Attal said Mr Véran will give “a clear, pedagogical presentation” on government strategy “to live with the virus”.

President Macron, attending the 17th stage of the Tour de France in Méribel (Auvergne-Rhône-Alpes), said that clear information on figures would be given “department by department”. He estimated the virus would continue to circulate “for some months” in France, and encouraged people in France to “hold on” for “better days” to come.

Reduced mask-wearing in communes in Bouches-du-Rhône

The number of communes requiring mask-wearing in all places in Bouches-du-Rhône (Provence-Alpes-Côte d’Azur) has gone down as the prefecture said “the number of positive cases of Covid-19 is not significant”.

Obligatory mask-wearing was originally brought in on Monday, September 17, for 27 communes, where incidences of positive cases were over the alert threshold of 100 cases for 100,000 inhabitants. On Wednesday this was reduced to 17 communes. Some of the towns taken off the list had fewer than 10 infected people living there.

High number of cases in Lyon

Lyon (Auvergne-Rhône-Alpes) is the second most significantly affected urban area, after Bouches-du-Rhône. The rate of incidence is currently at 168 people out of 100,000 inhabitants. Local prefects have not announced additional health and safety measures so far.

Yesterday Germany placed the Hauts-de-France on its travel risk list due to rising cases in the region.

It joins the French regions of Provence-Alpes-Côte d’Azur, Occitanie, Nouvelle-Aquitaine, Auvergne-Rhône-Alpes and Corsica, which were already on the list.

Travellers returning to Germany from these regions must take a test and quarantine while they wait for results. The Germany ministry for foreign affairs advises against non-essential travel to these regions.

State of health emergency lifted in Mayotte and French Guiana

Government spokesperson Gabriel Attal announced yesterday that the state of health emergency has been lifted in the overseas territories of Mayotte and French Guiana. As the health situation has improved in both territories, he said they will now follow the “same regime as the rest of the country” when it comes to Covid-19 measures.

Mainland France has been in a transitory period of exiting from the state of health emergency, which is planned to last from July 11 – October 30.

While powers to enforce health and safety measures have now been given to prefects to act on a local level in France, the State retains powers to restrict movement and gatherings nationwide. On Wednesday ministers passed a motion into law prolonging these State powers for an additional six months, until April 2021.

Covid-19: Is France doing too many tests?