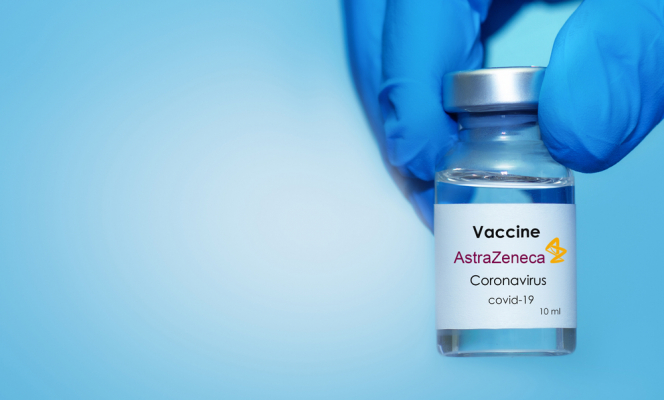 The UK is currently using three vaccines: Pfizer, Moderna, and AstraZeneca; with the latter much more widely used than in France Pic: StanislavSukhin / Shutterstock

France is now recording fewer cases of Covid-19 than the UK in the latest daily figures released by both countries. The last time this happened was in February.

The rise in cases in the UK is being linked to the spread of the Delta  –  or Indian  –  variant, which is estimated to be between 40-60% more contagious than the Alpha  – or UK  –  variant.

Over the same time period, the average number of cases in France dropped to 5,654.

This is the first time that the countries’ ‘graph curves’ have crossed since February 4.

The most up-to-date daily figures for both countries as of today are 4,475 for France and 7,393 for the UK.

Despite falling below the UK in daily cases on June 9, the level of incidence over seven days (the number of cases per 100,000 people) is still higher in France, at 67.8 cases for June 6, compared to 56 cases. Hospital admissions also remain “broadly flat” in the UK, according to the Health Minister Matt Hancock.

Figures from Public Health England (PHE) show that 54.2% of the UK population had been fully vaccinated by June 8. This compares to 21% in France.

The UK is currently using three vaccines: Pfizer, Moderna, and AstraZeneca; with the latter much more widely used than in France.

Some experts believe that its widespread use of the AstraZeneca vaccine could be one reason for the rapid spread of the Delta variant in the UK.

The president of government advisory council le Conseil scientifique, Professor Jean-François Delfraissy, told France 2: “In England, they are vaccinating most people using AstraZeneca, which has 30% less protection against the Indian variant. In France, we are mainly vaccinated with mRNA vaccines, which retain a certain efficacy.” This refers to the Pfizer and Moderna vaccines."

It is thought the professor was referring to a study by Public Health England on the Pfizer vaccine (which uses the same mechanism as the Moderna one) and the AstraZeneca vaccine, which found that both were only 33% effective against the Indian variant after one dose, and after two doses, respectively 60% effective and 88% effective.

The UK government states: "The difference in effectiveness between the vaccines after two doses may be explained by the fact that rollout of second doses of AstraZeneca was later than for the Pfizer-BioNTech vaccine, and other data on antibody profiles show it takes longer to reach maximum effectiveness with the AstraZeneca vaccine."

Read more: How is France tracking spread of Indian variant of Covid-19?

On May 9, President Emmanuel Macron said that the country needed to “continue vaccinating” with AstraZeneca, as it “will help us exit the crisis”. And yet, one month later, the number of AstraZeneca injections being given in France is at an all-time low.

According to the latest figures, only 15,000 first doses of the AstraZeneca jab were injected in France in the last seven days; the lowest weekly level since the vaccine was introduced in February.

AstraZeneca is still the second most given vaccine in the country overall, at 5.5 million, ahead of 3.7 million for Moderna – but well behind the most-used vaccine in France, which is Pfizer, at 31.2 million injections.

However, since May the number of weekly injections for Moderna has overtaken AstraZeneca, with even the Janssen single-dose vaccine now being given more.

France still has 2.6 million AstraZeneca doses ‘in the fridge’ ready to be administered. Around 2.7 million people vaccinated since mid-March will need to have their second dose in the next few weeks, to stick to the 9-12 week gap between doses recommended by the manufacturers.

The government has said that “a large part of this stock will be used for second doses”, and that they will not go to waste.

France could also offer vaccinations 'without appointments' to help ensure the remaining AstraZeneca stock is used.

But confidence in the AstraZeneca vaccine is low. A survey by Elabe for BFMTV found that only 31% of people in France “had confidence” in the jab, versus 54% who did not, and 15% who had “no view”.

Some of France’s ‘leftover’ stock – or stock that was originally intended to be delivered to France – is also being sent to the Covax programme, for use in developing nations. When stored correctly, the vaccines last seven months before they spoil.

A government source said: "By the end of the week, more than 800,000 doses of AstraZeneca will have been donated, mainly to African countries.

“By the end of June, it will be 1.5 million doses of AstraZeneca. These will be deducted from the deliveries that we were supposed to receive in France, and are collected directly from the factories, and then delivered to Senegal and Mauritania, for example.”

The Delta variant is estimated to be up to 60% more contagious than the Alpha variant first discovered in Kent last December, said Professor Neil Ferguson, of Imperial College London.

Some have suggested that the rise in case numbers in the UK is a sign that the AstraZeneca-heavy vaccination campaign has ‘failed’. Prime Minister Boris Johnson has said there is now uncertainty around whether the UK should relax all Covid rules as planned on June 21.

But, while case numbers have risen, deaths, intensive care admissions, and hospitalisations are not following the same trend. Death numbers in the UK still remain lower than in France (0.14 per million inhabitants compared to 1.11 in France).

Hospitalisations may be rising in some areas, but not at the same rate as cases, and not at the speed of the second wave.

This means that the first aim of the vaccines – to prevent people from getting severe cases of the illness, and therefore to reduce the saturation and pressure on hospitals – appears to have been achieved.

The second aim of vaccines is arguably to confer herd immunity on the population. The more contagious a strain, the higher vaccine coverage in the country needs to be before this threshold is reached.

For the UK strain, the threshold required was estimated at 70% of adults, but the greater contagion of the Indian Delta variant now means this will likely need to rise to 90%.

The higher proportion of vaccination coverage in the UK puts it at an advantage on that front compared to France, so far. But, as it is still far from a 90% coverage rate, this could explain the rising cases.

Could the UK just let the virus spread, if the number of deaths is still low?

Professor Jean-Daniel Lelièvre, immunology specialist, said that while the idea is tempting, especially as a way to increase herd immunity, he said that it is not practical in the long run.

He told Le Figaro: “Variants emerge when the virus spreads a lot. For the moment, none of the [strains] is uncontrollable, but who knows what will happen tomorrow.”

So far, the consensus appears to be that the UK has managed to stop the most vulnerable people from getting a severe form of the illness, and is preventing the saturation of intensive care units.

Yet, the longer a population does not have herd immunity, the more likely it is that variants will emerge.

Will the Delta variant spread in France too?

Professor Delfraissy has said that the Delta variant will “appear more significantly in France” over the summer, and gradually replace the Alpha, or ‘UK’, variant. Yet, he added that the widespread use of mRNA vaccines (such as Pfizer and Moderna) in France should slow its spread.

The spacing between vaccine doses is also longer in the UK than in France, at up to 12 weeks versus just over 5 weeks in France.

French Health Minister Olivier Véran has recently allowed the gap to be extended by several weeks to ensure that people travelling on summer holidays in the next few months do not miss their second dose.

Research published in medical journal The Lancet showed that it is safe to have a gap of 12 weeks between doses, but research from l’Institut Pasteur, published in The Lancet, has expressed concerns over delaying the second dose for too long as the Delta variant spreads, as a single dose may not offer sufficient protection.

The authors of the study said: “Altogether, our results suggest that a single dose of AstraZeneca vaccine will not display an optimal protection against B.1.617.2 [the Delta variant].”

Similarly, the UK Department of Health has said that the gap in Northern Ireland will now be reduced to eight weeks, to ensure faster full coverage, as the Delta variant spreads in the region.

Despite the decrease in France’s case numbers, the World Health Organisation has called for caution in Europe over the summer.

It warned against the ‘error’ of summer 2020, when the relaxation of Covid rules saw an eventual rise in cases in the autumn.

WHO Regional Director for Europe, Dr Hans Kluge said: “Over the past summer, cases gradually increased in the younger age groups and then moved to the older age groups, contributing to a devastating resurgence, confinements and deaths in the autumn and winter. Let's not make that mistake again.”

WHO figures show that across Europe, just 30% of the population has received a first vaccine dose, and only 17% are fully vaccinated.

Dr Kluge said: "Vaccination coverage is far from sufficient to protect the region from a resurgence. There is still a long way to go to reach at least 80% coverage of the adult population.”

He called for continued hygiene and distancing measures and the avoidance of foreign travel until vaccination numbers have increased.

French health pass launches today: How and when to use it
French Covid vaccine certificates to be updated for travel on June 22
Covid France: Southwest case numbers improving, says health minister

23 hours ago
4
Britons in France: Five groups 'at risk' of missing card deadline