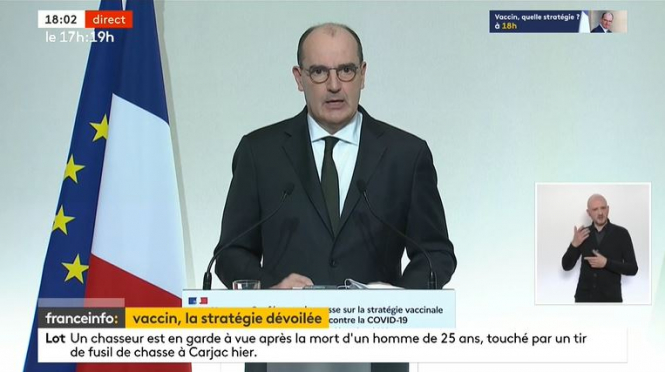 Prime Minister Jean Castex laid out France's vaccination strategy during a press conference on Thursday, December 3, saying that a vaccination campaign was a matter of weeks away and that one million vulnerable people are expected to be vaccinated as early as January.

"We will not start anything without the approval of the health authorities on each vaccine," Mr Castex said, adding that the country was ready to begin vaccinating as soon as the vaccines are authorised.

Mr Castex said, "getting vaccinated also means protecting others, it's an act of altruism."

The vaccine will be rolled out in three steps

March: 14 million people considered "at risk". This includes those over 75, then over 65s, then over 50s and also health professionals

Spring 2021: The rest of the population

'Brexit not an advantage in vaccine roll-out'

European affairs minister Clément Beaune denied that the UK, which is planning to roll-out a vaccine next week, had an advantage due to Brexit.

The UK is "entirely subject to the European framework until December 31", but "it has opted for certain accelerated procedures", he said.

France, meanwhile, has opted to work with the 26 other EU member states and has "opted for collective action, speed and security".

"It is a Europe of health that is gradually and rapidly being established," he said.

The prime minister also recommended that a maximum of six adults (children not included) gather to eat a Christmas meal together.

He said this number takes into consideration the recommendations put in place by other European countries.