France still on alert for snow and ice amid -18C conditions 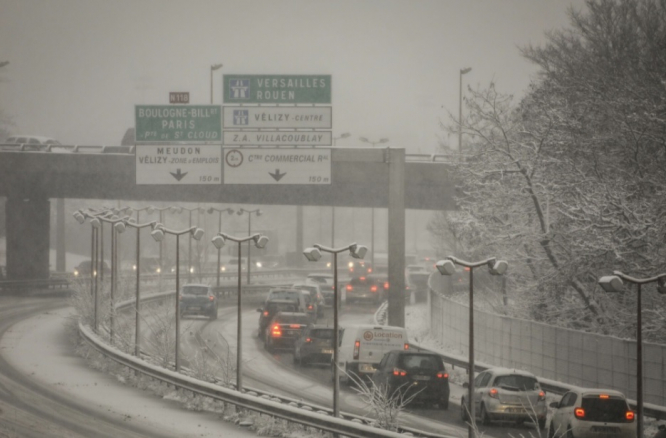 Snow and ice alerts remain in place for 34 departments in northern France as temperatures remain at -10C in some areas, roads are closed, and fears grow for the vulnerable and homeless.

In its morning alert, forecaster Météo France said: “This morning, from the Hauts-de-France to the Ardennes, the temperatures are between -5C and -10C. With wind from the north-east reaching up to 20-40kph, it may feel as cold as -15C to -18C.”

Between 2-5 cm of snow - and up to 10cm in some places - has fallen from Brittany to Grand Est, including in Ile-de-France. Météo France is also warning of ice this morning as temperatures remain below freezing in some parts.

The national road 118 was closed in Ile-de-France from 21:00 last night as a precaution, after heavy snowfall in February 2018 saw 950 vehicles and almost 2,000 people stuck on the route.

Heavy goods vehicles over 7.5 tonnes have also been banned from major roads in Ile-de-France and all drivers are advised not to travel unless absolutely necessary - and also within curfew rules.

Public transport has also been closed in many areas, including in Brittany, Ile-de-France, Pays de la Loire, Centre-Val de Loire and Normandy.

This includes buses and trains - including some services at Montparnasse and the Gare du Nord in Paris.

School transport has been suspended in four departments today in Ile-de-France: Yvelines, Essonne, Val-d’Oise and Seine-et-Marne. Remote learning lessons are being prioritised in Yvelines, Essonne, and Val-d’Oise, but a “minimum service” in schools will remain open for pupils who cannot stay home.

School transport is also set to be suspended in Loiret, Eure-et-Loir, and Loir-et-Cher; as well as Calvados, Eure, Manche, Orne, Sarthe, and Mayenne. It is also suspended in Brittany.

In Brittany, the forecast is now for rain. Drivers and residents in the area are warned to be especially alert as the water could later turn to ice as temperatures remain low.

More than 300 lorries have been stopped in the region - and kept in service stations - to avoid undue risk on the roads.

More snow is expected in the Franche Comté and Alsace regions this afternoon, but should ease up over the rest of the affected areas.

Fears for vulnerable and homeless

As temperatures stay low, fears are growing for the vulnerable and homeless.

The ministry for health has warned vulnerable people to stay alert to worsening health conditions, and to the use of heaters indoors, which can present a risk of carbon monoxide poisoning.

In a statement, the ministry said: “The very low minimum temperatures we have seen constitute a danger for vulnerable populations that are homeless or isolated; at-risk people (elderly, children, people with certain pre-existing conditions) and potentially all at-risk populations.

“Cold temperatures can worsen cardiovascular conditions [and cause] hypothermia and frostbite,” it said.

It recommended that people limit outdoor activities and only go out on the roads if highly alert, for imperative or urgent trips.

Children and infants are especially at risk and should have their heads and extremities covered at all times; while older people are at risk from falling on snow or ice if outside.

People are also warned not to use heaters indoors if they are not specifically for indoor use - such as camping stoves, or BBQs and only to keep on space heaters (diesel or paraffin-fired heaters) for a limited amount of time.

Indoor heaters present both a fire and carbon monoxide risk, the ministry said.

People who must go outside are advised to dress very warmly and to cover as much skin as possible, as well as the head. If taking the car, take a blanket, a phone, and any essential medicines in case.

In several departments - especially in the Nord and Grand Est regions - the “grand froid” status, level two, has been initiated, as temperatures are set to remain at -7C to -8C.

“Grand froid” status is an official definition in France that allows certain services to be initiated to help the most vulnerable in society.

It is declared after a persistent cold episode that lasts at least two days, with temperatures at much lower levels than the average for the area and the season. The presence of wind, which can make temperatures feel even colder, is also a factor.

It has three levels, from low to high: yellow, orange, and red.

In cities such as Lille, homeless associations are among those working to help people at greatest risk from the cold.

Volunteers in hi-vis jackets have been distributing food parcels and hot soup to homeless people and also giving out thick gloves, jackets, scarves, socks and duvets.

The most vulnerable are permitted to stay in emergency accommodation between 21:00 and 08:00.

The “grand froid” status means that 160 extra overnight accommodation spaces have been added to the 900 normally available as part of the winter season provisions in the Nord. Normally 500 places are opened over winter, but additional spaces have also been made available this year, partly due to the health crisis.

Empty hotel rooms - as well as some public spaces such as gymnasiums - are being opened to welcome the homeless, but sometimes the most vulnerable are reluctant to go, sometimes because their pets are not allowed or they are unaware help is available.

Nicolas Pauliac, interim manager of equality in Lille, told newspaper Le Monde: “In terms of welcome spaces, we have an exceptional number [this year]. There are no longer any homeless families and we are reassured by that.”

Arnaud Lexa, a volunteer at Samusocial, who works to identify vulnerable people living in precarious situations, told Le Monde: “My fear is that I will find people dead in their tents. No-one chooses to be homeless. In Lille, we have all sorts of people: homeless people, people with psychiatric disorders, drug users, migrants, the working poor, students, high school students.

“Even when you know the area, there are many people who are ‘invisible’, who you just don’t see.”

If you see anyone who is vulnerable or who needs emergency support due to the cold, you can call 115 to contact emergency social service providers.