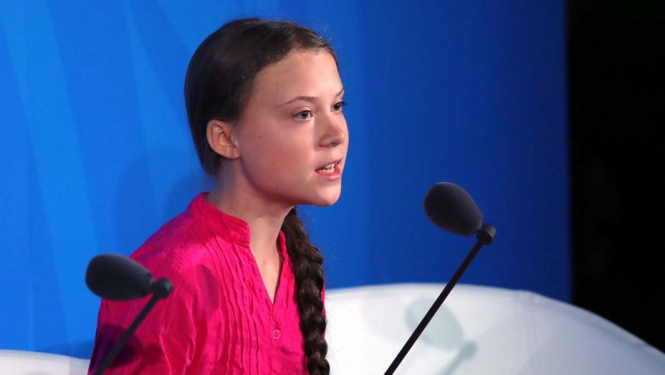 Ms Thunberg has launched the case with 15 other young people, and has support from international law firm Hausfield, and international children’s charity Unicef.

France is on the list, as is Germany, Argentina, Turkey, and Brazil.

The case has accused the countries of failing to address climate change, and thereby also failing in their responsibilities required by the United Nations Convention on The Rights of The Child (UNCRC).

This convention, which came into force in 1992, is the most widely ratified human rights treaty in the world, according to Unicef - with the notable exception of the USA.

It has 54 articles, covering all aspects of a child’s political, social, and cultural rights, and puts the responsibility on adults and governments to ensure these rights - such as the right to safety from violence (Article 19), the right to education (Article 28), the right to be heard (Article 12), and the right to life survival (Article 6).

But during the UN Climate Summit currently taking place in New York, USA, Ms Thunberg said that the leaders of these five countries “had not upheld their responsibilities” towards the convention.

Another activist, 14-year-old Alexandria Villasenor, said: “Each of us has had our rights violated and denied.”

A French activist, 16-year-old Iris Duquesne, said that the case is intended to “make [these countries’ leaders] understand that there is a real emergency”.

Speaking to news network FranceInfo (video below, in French), she said: “Other countries are seeing that children are standing up, and big organisations are standing up [with us], to ask them to do something. It can make them understand that there is a real emergency, and there has been for a long time. They have to stop talking, and actually do something concrete to save us all.

“I expect France to do more than it is currently doing. Today, France is doing a lot, but not enough. Plastic pollution - we have seen in other countries, such as Sweden etc, that it is possible to go 100% plastic free - and that is what I am expecting from the French government.

“I would also like to see, in the next 5-10 years, that we have no more coal power stations, and to no longer use oil, and reduce this as much as possible to protect the planet…[using renewable energy] it is totally possible to live in towns that do not hurt the planet or people.”

The convention itself contains an “optional protocol on a communications procedure” - ratified by 44 countries - which allows children to complain to the UN children’s rights committee if they believe that their rights have not been respected. Any complainants may also make recommendations to countries on how to change the situation.

Lawyer Michael Hausfield said that he “hopes that recommendations will be made in the next 12 months”.

The five countries on the list are one of the 44 states to have ratified this “optional protocol”, as well as being some of the biggest polluting nations on the planet, and part of the richest G20 group.

This is why they have been singled out for legal action, as opposed to other big polluter nations such as India, China, or the USA, which did not ratify.

The Hausfield lawyers said that “old industrial nations” such as Germany and France are responsible for a significant amount of historic emissions, even if today, they are no longer among the world’s biggest contributors of greenhouse gases.