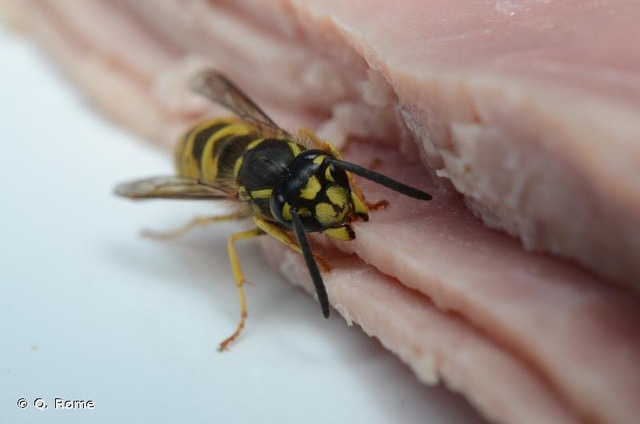 The common wasp, pictured, is on of the three types of wasp to have increased in population this year
By Jane Hanks

It is too early to say just how big the rise in population is, but it is certainly much higher than last year, said Quentin Rome, an entomologist who specialises in wasps at the Muséum National d’Histoire Naturelle in Paris.

“2018 was a good year for wasps, last year was poor, but this year there are more than there were two years ago. We are talking about the three varieties which are most well known. These are the common wasp, the German wasp and the Asian hornet,” he said.

“There are several other varieties and not all of them are faring as well. But these three are the ones most likely to be a nuisance to people in the summer, particularly when they are eating meals outside.”

He said that unlike many other insects, these varieties of wasp are not threatened by a decline in their population: “In fact, they tend to thrive rather than suffer from the way we live in the modern world”, he said.

His advice for anyone plagued by wasps at the meal table: “Don’t make sudden, violent gestures, because it is then that the frightened insect is most likely to turn on its defence mechanisms and sting.

“They are social insects and communicate with other wasps from their colony and are likely to call in more wasps to help out, thus making the problem worse. Killing ten wasps will also not solve the problem, because they are so numerous there will be others to replace them.”

He recommends not resorting to chemicals from the shop to kill them but to attract them away from the table by putting a small piece of meat or something sweet three to five metres from the eating area, about fifteen minutes before the meal begins.

“The wasps will prefer to eat food where there are no people and they will use their methods of communication to attract other wasps to the food you have left for them, rather than being tempted by the food on your table. They are different from bees, because as well as sugary foods they are carnivores, so will come to your table for both the meat and dessert courses.”

He said this method is well worth trying and does work to make eating outside more pleasurable.

“If wasps are proving a real nuisance, then I would advise calling in someone to destroy the nest," he added.

"However, it must be remembered that wasps are good for your garden, because they are natural predators who eat other insects and so help keep the balance of different varieties. They are also pollinators, though they do not play as significant a role as bees.”

Mr Rome said that weather conditions in winter and spring determine the population numbers each year. For example, wasp populations will thrive if the winter is cold enough to kill threatening bacteria but not too cold to kill the queen, and it lasts long enough that she does not wake too early to an environment where there is not enough food. The spring then needs to be mild with enough rain for the wasps to develop. In 2019, late frosts killed many young wasp populations.

“Conditions up to June are crucial. After that the wasp colony will be established and survive the summer until it dies out and the new queen goes into hibernation,” said Mr Rome.

To get rid of a wasp nest you have to call in a professional pest control company. The fire service will no longer respond to calls unless there is an emergency and you can find no-one else in the area, and then they are entitled to charge as destroying nests in a private property is not deemed part of their public duties. For an Asian hornet’s nest you can ring for advice from your local mairie, as some may pay for their removal.

Read more about wildlife in France: