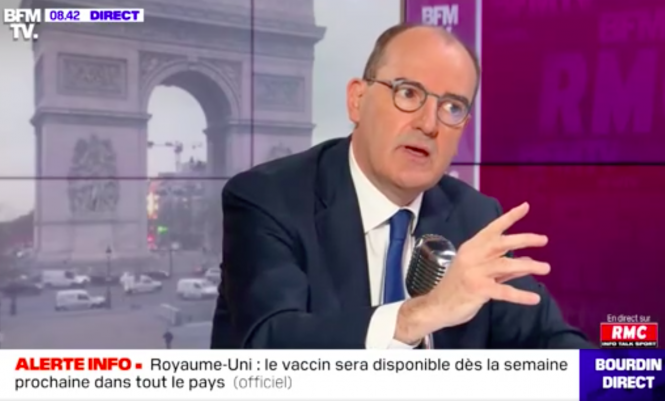 Prime Minister Jean Castex announced that a “massive” testing campaign will be implemented after the end of year festivities in France. “Or maybe before. We are working on it,” he said.

Speaking on news channel BFMTV-RMC this morning (December 2), he said: “The idea would be to work by trial, which has been done in other countries, testing massively in densely-populated urban areas.

The prime minister said the testing would be done in three phases, although areas to be tested had not yet been chosen. “Maybe the north, maybe Normandy, maybe the Auvergne-Rhone-Alpes region,” he said.

Ski stations in France are currently closed as a health precaution. The prime minister said it was important that people in France did not use this as a reason “to go and contaminate themselves” in other European countries where ski stations are open over the festive period. “I want to protect people,” he said.

On Tuesday, President Macron also said that “restrictive and dissuasive measures” would be taken to stop people in France going skiing in Switzerland over Christmas.

Other key points from the interview

Places of worship will be able to open with a maximum limit of 30 worshippers allowed inside at any one time, with a 6m2 protective space around each person.

The PM said that exceptions may be made for Christmas masses.

Authorisation for a Covid vaccine in France is expected towards the end of December, according to the PM, who added that “authorisation is needed from American authorities and then European” before the vaccine comes to France.

He said: “Through the European system, we have pre-ordered enough to vaccinate 100 million people. It is essential that as many people in France as possible accept getting themselves vaccinated.”

The public will not be able to attend sports matches in stadiums “before December 15, that is certain”, according to the PM. He said no collective amateur sports would be able to restart before this date, and did not indicate a date when they may resume.

As for sports centres and gyms, Mr Castex said he “could not imagine them reopening before January 20”.

France's train and plane services to increase over Christmas