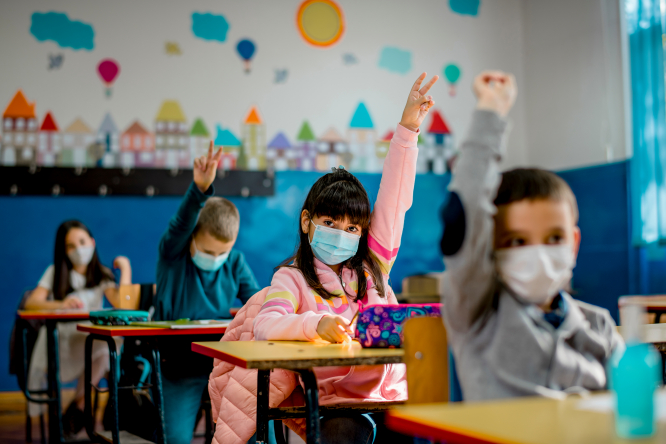 Prime Minister Jean Castex has announced three new Covid infection control measures for French schools in a bid to simplify the system for parents and pupils.

This comes as parent and teacher unions called for strike action this Thursday (January 13), citing complex Covid protocols and a lack of protection for staff and children within school settings.

The co-president of parent union FCPE has complained of a “chaotic return to school after the Christmas holidays.”

The new measures announced by the prime minister are:

Parents will now be able to wait until the end of the day to take their children to be tested if they are found to be a close contact of a Covid case.

If a positive Covid case is detected, the whole class must undergo a series of tests, and until now parents were contacted straightaway with instructions to this effect.

Now they will be able to collect their children at the normal time.

Children identified as close contacts of a Covid case must currently carry out a PCR or antigen test and then two further self-administered tests on days zero, two and four after the positive case is reported.

Mr Castex has said that he has sought permission from the health authorities to relax the requirement to three self-administered tests only, which could help to reduce parents’ waiting time at pharmacies.

These self-tests will also be free of charge. If a child tests positive in a class, the parents of the other pupils will receive an attestation enabling access to these three tests without charge.

One attestation instead of three

Parents will in future only have to provide one attestation to prove that their child has tested negative and not three.

Mr Castex said that this week 11 million self-administered tests would be delivered to pharmacies.

Government spokesperson Gabriel Attal said following the announcement of the relaxed rules that the government was “working with teachers,” and that “we prefer to test than to close the class.”

“We are adapting with common sense and pragmatism in the face of the difficulties which families are encountering,” he added.

However, Guislaine David, co-secretary general of the SNUipp-FSU teaching union has criticised the fact that Mr Castex made his announcements without consulting teaching bodies, and that the government has relaxed certain measures while case numbers continue to rise.

“Teachers were able to listen to the prime minister announcing yet another relaxation this evening, while we are asking for heightened hygiene measures in schools,” she said.

The call for strike action has therefore been maintained both by teaching unions and equivalent parent organisations.

13 hours ago
2
Undelivered letters: Why is France’s postal service struggling?