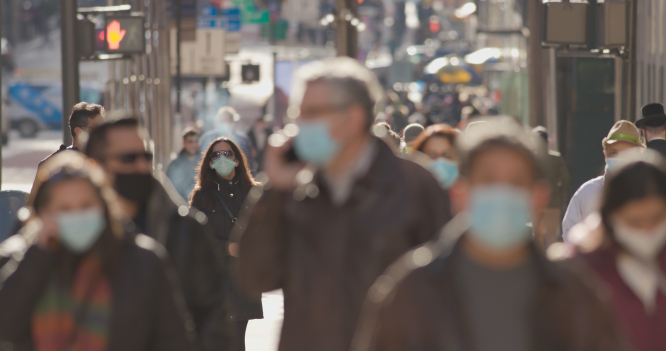 The French government is set to hold a meeting on the Covid situation on Monday Pic: blvdone / Shutterstock

The French government is set to hold a special meeting on Monday to see if it is necessary to take additional measures to curb the spread of the fifth Covid wave.

He added that the fifth Covid wave is “particularly strong” and that the “situation is worrying,” citing a weekly case number rise of 60%.

This comes as nine cases of the new Omicron variant,which has been identified as a variant of concern by WHO, are confirmed in France and several other suspected cases undergo further sequencing. One of the cases is on Réunion island.

“So far, the majority of sequenced cases originate from South Africa,” stated Santé publique France in its latest update on the situation. The cases are spread across Auvergne-Rhône-Alpes, Provence-Alpes-Côte d'Azur, Ile-de-France, Pays de la Loire and Grand Est.

However, the vast majority of cases are still revealed to belong to the Delta variant.

“We must have an anticipatory attitude to this virus but let’s not get confused about what we are fighting: the real enemy is the fifth wave with the Delta variant,” Jean-François Delfraissy, president of the Conseil scientifique government advisory body, told BFMTV.

He added that the spread of Omicron is “unavoidable,” stating that: “We should see this Omicron variant progressively change and overtake Delta,” towards the beginning of next year, a delay which “gives us time to prepare.”

There are currently no indications to suggest that Omicron is more resistant to the vaccines we have at our disposal, but health authorities are working to increase the rate at which positive Covid cases are sequenced in order to better monitor the evolution of the situation.

Health Minister Olivier Véran stated yesterday that the government “remains extremely vigilant,” as the Institut Pasteur predicts that there will be 3,000 Covid patients in intensive care by mid-December, compared to the 2,000 currently being treated.

“We will not let the strain become too much” in hospitals, he added.

Mr Castex also urged people to get vaccinated if they have not already done so, saying that there “are all the doses that we need” and that everyone eligible can be sure of getting their booster.

Since the booster dose campaign opened to all adults in France, 4.5 million appointments have been booked, according to the Prime Minister.

There were 48,416 new Covid cases recorded in France yesterday, with 10,790 people being treated for the virus in hospitals, 1,934 in intensive care, according to Santé publique’s latest figures.

Attempting to establish what Omicron means for the world

Since South Africa alerted the world to the emergence of Omicron on November 25, virologists and researchers from across the globe have been attempting to work out whether this variant “of concern” is more dangerous or vaccine-resistant than those which have gone before it.

Omicron has a large number of mutations which are believed to make it highly transmissible, and could mean that Covid vaccines are less effective against it.

Olivier Schwartz, director of the virus unit at the Institut Pasteur, has said that sequencing the variant “allows us to identify where its mutations are: are they in places which are in contact with the ACE2 receptor, which serves as the virus’ gateway into our bodies?

Or “are they in places which allows [the variant] to escape from antibodies?”

By comparing the sequence of Omicron to that of Delta and other variants, scientists have identified around 30 mutations in the Spike protein, which plays an important role in enabling the virus to enter the body.

The antibodies which are produced by the current vaccines target the Spike protein found in the initial Covid strain, and so they could possibly be less effective against the new variant.

Scientists can then test Omicron cells against blood samples containing antibodies, to see how the new variant might evade human immune responses.

The laboratories behind our Covid vaccines will then be able to adapt their products accordingly, a process which should take around six weeks, with the first doses being administered within 100 days.

However, while researchers can begin to determine the transmissibility and vaccine resistance of Omicron, they will only be able to observe the severity of the symptoms caused by the new variant by monitoring real-life cases.

Doctors will need to record the nature of the cases arriving in hospitals in order to achieve this.

US to tighten Covid rules for travellers from France and elsewhere

Updated: Where in France do I have to wear a mask when I am outdoors?

Delays reported in rush for booster Covid doses in France