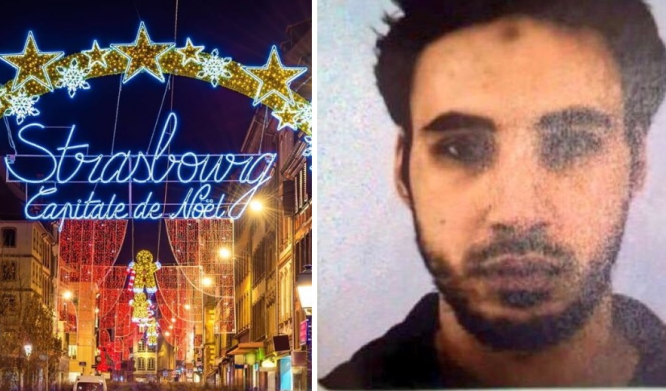 Two people died, with one person in a vegetative state and 12 others injured - of which six severely - after the shooter opened fire in the city centre near the famous Christmas market two days ago.

Suspect Mr Chekatt was able to flee the scene after the attack by forcing a taxi driver to take him back to his home neighborhood of Neudorf.

A 29-year-old Strasbourg-born resident, he is known to police after having served prison time for non-terror related, yet severe, crimes. He is a Fiché S - listed on the national database of people thought to pose a threat to state security - and is thought to have become radicalised in jail.

On December 11, he managed to escape police three times; firstly, on the morning of the incident, when he was due to be arrested at home - under separate charges of “attempted murder and conspiracy to commit a crime” - but was not at the property.

Secondly, at the scene of the shooting itself; and thirdly, when he arrived back in Neudorf and escaped shots from officers and security agents before fleeing again.

Around 720 people are now involved in his manhunt, including 100 police, many anti-terrorism officers, military officers and several helicopters, and the terror department of the Paris police has launched a murder and terror crime investigation.

The Franco-German and Franco-Swiss borders are also being particularly scrutinised, as police believe that Mr Chekatt may try to escape France through Germany or Switzerland. He was jailed in Germany in 2016 for theft, and has also spent time in jail in Switzerland.

Mr Chekatt’s family have been questioned too, with one of his brothers also known to police anti-terror forces.

One of the investigation’s main questions is to establish if the shooter was working alone, or had accomplices who could be helping his escape.

He said: “In the city centre, there were a lot of people; visitors that came to the market. There was too much risk of injuring these people. [The young officers there] have automatic rifles, and they shot back, but being careful not to injure anyone else.”

Alain Fontanel, deputy mayor of Strasbourg, explained how the shooter was able to enter the area in the first place.

He said: “We have never checked every single person entering the market, for a simple reason: it is not possible, from 11h to 20h, for four weeks, to check thousands of people who enter.”

With Mr Chekatt still at large, and in an attempt to avoid any “copycat” crimes, Prime Minister Edouard Philippe today announced that 1,800 extra military officers are being deployed across France to improve security at public events, especially at Christmas markets.

The terror threat level in France is still at the maximum of “Alerte Urgence Attentat (emergency attack)”, and a number has been set up for anyone worried about relatives after the incident (01 43 17 43 17).

Last night, the Eiffel Tower lights were switched off in honour of the victims of the attack.