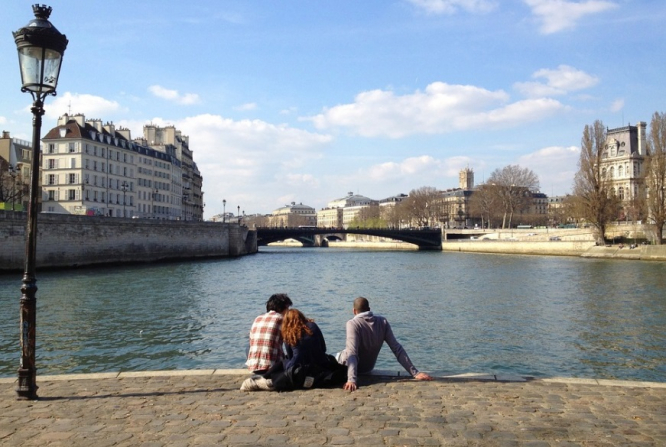 The promise comes ahead of the capital’s planned hosting of the Olympic Games in 2024, during which certain triathlon and swimming competitions are set to held in the city’s famous river.

Ms Hidalgo may be trying to avoid a repeat of the situation during the 2016 Rio de Janeiro Games, in which the river Guanabara was deemed too dangerous for athletes to use.

Unsurprisingly, swimming is not allowed in the Seine in its current state, as it is polluted with E.Coli bacteria, intestinal bacteria, natural pollutants, and faecal matter.

Célia Blauel, in charge of environment and water policy for Paris, warned Le Figaro newspaper that anyone who takes a dip risks “a nice dose of gastro and a nice big fine”.

As a result, the new project - which is expected to cost €1 billion over five years, funded by the Mairie, the Ile-de-France region and the State - will focus on several issues.

Firstly, boats - whether business, tourism or individual houseboats - will no longer be able to dump their waste anywhere in the river.

A new law will demand that they connect to a special “sewer collection network” to dump waste, and they will be encouraged to have a “double tank” system, to sort black waste from grey.

Any boats that are travelling far from the sewer network will be offered the chance to connect to special sewer boats to dump waste, rather than using the sea or river.

Similarly, an overhaul is expected on the dirty water and sewerage systems in Paris, which can become saturated after heavy rainfall. Many now have “storm drains”, allowing the release of dirty storm water into the river in stages, rather than all at once.

The system also hopes to install even more drains and dams, which will keep water underground in existing pipes, funnelling it directly to purification plants.

The city’s two big plants - at Clichy-la-Garenne (Hauts-de-Seine) and Épinay-sur-Seine (Seine-Saint-Denis) - will also have improved systems installed, including state-of-the-art UV filtering, allowing them to clean water that has been dumped into the natural surrounding environment.

Waste water systems from private homes will also be improved: including systems that will send used water directly to cleaning plants, and cleaner rainwater back into the environment.

Currently, certain pipes have been found to be contaminating water, with the Council having identified 94 priority zones to investigate.

The quality of the river water has already been improving in recent years, Ms Blauel pointed out.

She said: “If we were judging the water purely in dry weather, we would not be far off the quality needed for swimming. The problem is that storms and rainfall lower the quality of the water.”

The Villette pool, a clean part of the river designated for swimming, is open for the second ever time this year, after it opened to Parisians last year.

Last year, over 53,000 people took advantage of the clean area to bathe, although three areas were closed for one day after heavy rainfall, as the “level of bacteria in the water” was judged to be “higher than the norm”.

Ms Blauel added: “We want to make it so that the quality stays the same, no matter what the weather is doing. That is what we have managed to do with the Villette pool, and we have succeeded in doing that relatively quickly.”