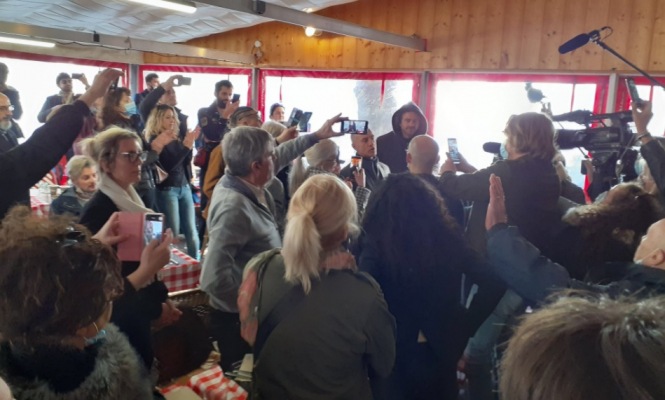 [UPDATE January 29: The restaurateur has now been released from police custody after 24 hours of detention in connection with allegedly employing an illegal worker.]

A restaurant owner in France is in police custody after opening his restaurant to around 100 customers as an “act of resistance”, despite continued Covid-19 closures.

Christophe Wilson, owner of Le Poppies restaurant in central Nice, served around 100 meals to paying guests at lunchtime on Wednesday January 7, despite restaurants being banned from opening due to Covid-19 rules.

Customers sat on tables, relatively close together and most not wearing masks, on the restaurant’s covered terrace. The gathering was stopped shortly after by police.

The prefecture of the Alpes-Maritimes region said last night: “The restaurateur who opened his establishment at lunchtime in Nice is in police custody this evening.”

His chef, a foreigner found to be working in an “irregular situation”, has also been placed in custody, while a waitress was fined €135.

Mr Wilson described the opening as an “act of resistance”, and served dishes with calls of "freedom!".

He said: “We are all in agony, there are thousands of jobs affected, there is an entire line of people behind restaurateurs...Someone has to give everyone else a push, and if it has to be me who takes the risks, then I’ll take them.”

The waitress, named Morgane, who was fined, told news source BFMTV: “It’s taking a risk, but for one day, I got my job back, and I feel good, my terrace is full.”

The prefecture said: “The identified people [customers] who took part in this banned gathering were, or will be, all fined.”

Local news source France Bleu Azur said that Nice authorities had confirmed that the restaurateur remained in custody in connection with the “employment of a person without [adequate] papers”.

One person eating at the restaurant told BFMTV: “We need to get together socially, for morale.”

Another said: “We want to support restaurateurs, so we are here in person.”

One customer, who was wearing a mask, said: “It’s a change, you know, compared to normal.”

Before the opening, Le Poppies had been closed since October 30, under the Covid-19 restrictions imposed by the government.

The opening comes as a Facebook group with 3,000 members has called for restaurants in France to open on February 1, as an act of “civil disobedience” towards the government.

Valerie, the owner of the restaurant Chez Val in Paris, has said that she is planning to open on February 1. She said: “[We are doing it] so that people don’t forget about us, and trying to bring a bit of soul back into this restaurant, which has been closed for far too long.”

It comes as the Senate approved the extension of the state of health emergency until May 3. This is one month less than had been proposed. Overall the extension was passed by 235 votes in favour, 39 votes against, and 70 abstentions.

The bill further extends the government’s ability to close shops and restaurants due to Covid-19.

Normality in France is at least six months away