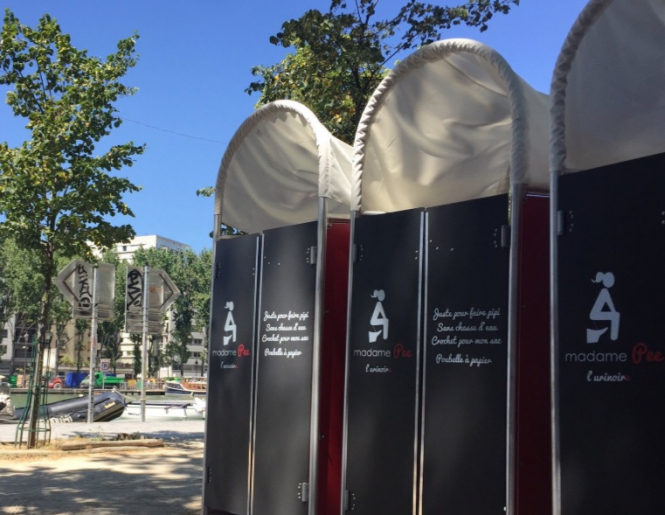 The female urinals from French start-up Madame Pee have been installed in Villette, Paris
By Connexion journalist

The female urinals, from French start-up Madame Pee, have been installed by Paris Plages - the mayoral office that creates temporary beaches along the River Seine in the summer months - in the city’s Villette district.

They will be available to use until September 1, and aim to cut use time per visit from an average of 2 minutes 30 seconds, to 30 seconds-1 minute maximum.

The urinals are also designed to be hygienic and avoid the need to touch anything or to sit down properly during their use, as they have swing doors and an ergonomic, curved bowl - plus a hook for a bag, toilet paper, and a discreet bin.

They also aim to save water, as they do not have a flush.

Madame Pee was created by founder Nathalie des Isnard, who became frustrated with how long women were forced to wait for the toilet at public outdoor events such as festivals.

She said: “The idea came to me during a big music festival in the Paris region. I was going to listen to a concert; before going I went to the toilet, and I had to queue for half an hour. As a result, I missed the first part of the concert.”

Explaining the concept, Ms des Isnard said: “In contrast to men, [women] need a little more privacy because we undress and redress; we can’t do otherwise. So we created a product that offers privacy, allows you to be covered, and be quick.”

In a video created by Madame Pee, which shows the urinals installed at a music festival, many users had positive reviews.

One said: “I waited for an hour at the [normal] toilets, and then I came across these - they are eco-friendly, and clean.”

Another user commented: “There is no queue, and it’s very practical to go quickly.”