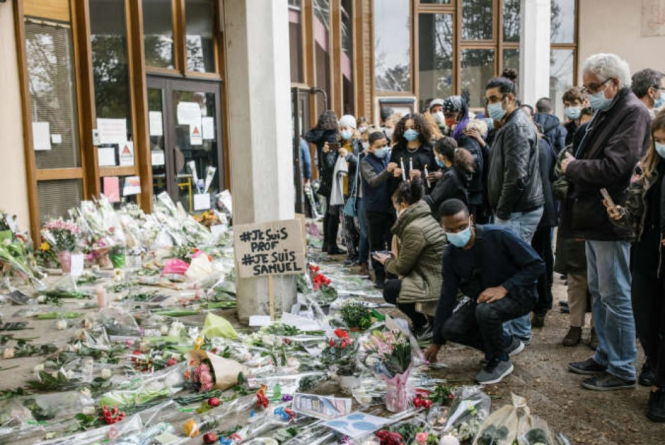 An 11th person has been taken into police custody in connection with the killing of French teacher Samuel Paty, as solidarity marches take place across France and an hommage national funeral is confirmed.

The person is a friend of Abdoullakh A., the 18-year-old perpetrator, who was himself killed by police on Friday night.

Also in police custody are the attacker’s parents, grandfather and 17-year-old younger brother; as well as several other people in his social circle. The family lives in Évreux, in Normandy.

A terrorism investigation has been opened into the attack.

History teacher Samuel Paty was stabbed and beheaded close to the school where he worked in Conflans-Sainte-Honorine in Yvelines, north of Paris, on Friday October 16.

The murder came several days after Mr Paty showed cartoons of the Prophet Muhammad to his pupils, as part of a class on the principles of free speech.

Speaking soon after the incident, President Emmanuel Macron described it as an “Islamist terrorist attack”, and said in a statement: “I want to be very clear. They won’t win. We will [all] act to block this. They will not divide us. That is what they want, and we must hold on, all of us...and be united.”

Read more: Paris killing: What we know about the attack

More on those in custody

One of the 11 people in custody has been reported as Abdelhakim Sefrioui, a known radical Islamist, who has had “fiché S” status for several years, meaning he is known to police and anti-terrorism authorities in connection with his extremist views.

Before the killing, Mr Sefrioui had accompanied an angry parent of one of the pupils of Mr Paty’s class to a meeting with with principal of the Collège Le Bois-d'Aulne, calling for Mr Paty to be fired.

Mr Sefrioui is known to authorities as an anti-Semite, who has condemned some mosques in France as “infidel” due to what he sees as their “too-close links” with Israel. He has also called for violence against the “Islam of France”, has previously violently disagreed with imams in Paris, and taken part in pro-jihad, pro-Gaza and pro-Hamas demonstrations.

He has claimed to be part of the “Council of the Imams of France”, and reportedly has links with the Grande Mosquée de Pantin (the Pantin mosque in northeast Paris).

In a video filmed by the father of one of Mr Paty’s pupils, later posted on Twitter, Mr Sefrioui described the meeting with the collège, which took place before the killing of My Paty. Mr Sefrioui accused the principal of a “lack of respect” and “irresponsible and aggressive” behaviour towards Muslims at the school.

He said that he and the parent had called for the suspension of the “hooligan” teacher, and had planned further demonstrations in front of the school against Mr Paty’s classes.

Solidarity and support marches are taking place across France today following the murder.

Events are planned in cities including Paris, Lyon, Toulouse, Nantes, Lille and Marseille in honour of Mr Paty. Most events are set to begin at 15:00.

Charlie Hebdo, the satirical magazine that was targeted in a terrorist attack in 2015 - when 12 staff members were murdered and 11 injured by two gunmen - and whose cartoons are thought to be among those shown by Mr Paty as part of his class, also posted notice of the Paris event.

The post called for a “gathering” in honour of Samuel Paty, “for freedom and against terror”, and in “support of the teaching body”.

The event is set to begin at 15:00 in Place de la République, and has been organised in partnership with the groups Dessinez Créez Liberté, SOS Racisme, and teachers’ unions.

Country-wide mayoral association, l’Association des maires de France has also called for all communes across the country to pay tribute to Mr Paty by “displaying on their buildings the words #JeSuisEnseignant (I Am A Teacher), to hold one minute’s silence during the next council meeting, and to lower the Mairie flag at half-mast on one day”.

The hashtag #JeSuisEnseignant is a reference to the hashtag #JeSuisCharlie (I am Charlie), which rapidly spread across social media in support and solidarity after the Charlie Hebdo attacks in 2015, and has since become a symbol of anti-violent sentiment.

Other hashtags to have spread since the murder are #JeSuisProf (I Am A Teacher) and #JeSuisSamuel.

The Elysée palace has confirmed that an “hommage national” funeral will be held, in coordination with Mr Paty’s family, this Wednesday (October 21). The location has not yet been confirmed.

An hommage national is a type of public state funeral ceremony held in France, usually reserved for military figures deemed to have offered exceptional service to the nation. It can only be authorised by the President.

The statement added: “Other expressions [of support] and announcements are expected following more meetings [on the issue].”

Prime Minister Jean Castex has today (Sunday October 18) said that the state is working on “a stronger, faster and more effective strategy for when a teacher receives threats” and said: “The state will rise to support teachers by responding with the greatest strength against all the enemies of the Republic.”

Paris killing: What we know about the attack