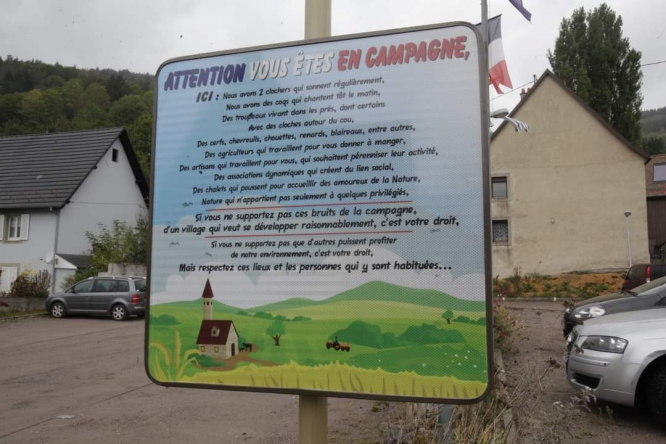 The sign has been installed in the village square, to the approval of residents
By Hannah Thompson

A village in northern France has become the latest to proudly stand by its many countryside sounds, installing a sign with a message for city-dwelling visitors who might wrongly expect a more peaceful setting.

Muhlbach-sur-Munster in Haut-Rhin, Grand Est, has installed a sign in its main village square, which reads: “Beware, you are in the countryside. Here, we have two [church] bells that ring often, roosters that crow early in the morning, and cow herds in the fields with bells around their necks…”

The sign continues: “We have farmers who are working to give you food, artisans who are working for you...if you cannot stand these countryside noises, from a village that wants to develop itself reasonably, that’s up to you...if you cannot stand that others might benefit from our environment, that’s up to you...but respect this area and the people who are used to all...”

Village mayor Patrick Althusser told news service FranceInfo: “[Sounds] are part of our heritage, we must be tolerant. We are not looking for drama. This sign is more about raising awareness, not to be a warning. Sometimes some people come to villages for a weekend or holiday, and forget about this type of noise.”

One village resident added: “We were born into this, it is part of [living in] the valley. I think it’s great to remind people that we are in the countryside.”

Another said: “There are so many people who complain, who do not like the countryside noises. I think [this sign] is a very good thing.”

The village is the latest to proclaim its “countryside noises” and remind visitors that the sounds are part of its countryside “heritage”, after a series of reports in recent months suggested that some city dwellers were complaining about village noises disturbing their holidays.

In December last year, a couple in Dordogne said they were still fighting a long-running battle to have their pond filled in after neighbours complained about the frog noise; while in October, a mayor in the Haute-Savoie took out a decree to “preserve life in the countryside” after one of his residents was ordered to pay €4,000 after his neighbours took him to court for the allegedly “too-loud” crowing of his two cockerels.

The decree came after famous Île d'Oléron (‎Charente-Maritime) cockerel “Maurice Le Coq” hit international headlines when a court gave his owner Corinne Fesseau 15 days to remove or silence him, after neighbours had complained that his early morning crows were disturbing their sleep.

The initial ruling was later overturned by a court in Rochefort. This second court rejected the neighbours’ complaint, and ordered them to pay €1,000 in damages to the animal's owner, who was allowed to keep Maurice in the end.

In a similar case, another cockerel - Coco, from Margny-lès-Compiègne in the Oise, ‎Hauts-de-France - was the subject of a popular petition after a court ruled the bird was too loud.

It also comes two months after gendarmerie in the Indre-et-Loire reported that a resident had called them after hearing “screams of help”, which actually turned out to be cockerel crows from a nearby yard.

Other similar cases have been reported in recent years, including a farmer who was ordered (and refused) to remove ringing cowbells from his herd; a pest control company in Dordogne that was shocked by a request to get rid of garden cicadas; and one village that even held a local referendum on whether to allow church bells to ring in the morning, after one resident complained.

In January this year, a bill to legally “protect the noises and smells of the countryside” was even considered by MPs.

Battle over frog noise in Dordogne not over