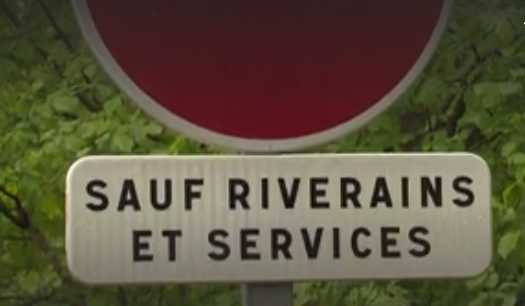 Residents of a small French village have seen unwanted traffic - diverted through their quiet commune by a popular sat-nav system - drop to a trickle after installing a simple sign.

For three years, thousands of motorists have driven daily through the quiet streets of Parmain, Val-d'Oise (Ile-de-France) guided by the Waze app which directed them that way to avoid rush-hour congestion on a nearby autoroute.

One resident counted 1,200 cars a day passing her house in the normally quiet village - population 5,500 - most of them at rush hour on roads that were not set-up for such levels of traffic.

But now a simple no-entry sign, except for residents and services, has seen vehicle numbers drop to just 20 a day.

"This is a message sent to Waze, to say that is enough," said Loïc Tallanter, mayor of Parmain.

Some 14million drivers in France regularly use the GPS app, which offers real-time alternative routes to avoid traffic hotspots.