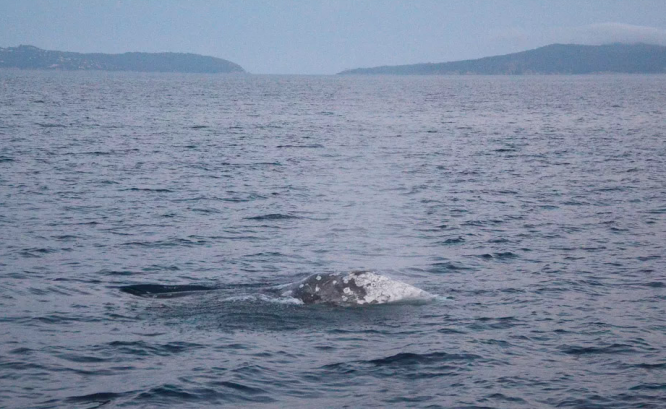 Scientists have called for people living along the south coast of France to help find a grey whale spotted in the area.

The whale was last seen on Friday afternoon, April 30, near Bormes-les-Mimosas (Var).

Scientists have been tracking it for days, as it is highly unusual for a grey whale to be spotted in the Mediterranean sea.

The animal is in danger as it is severely underweight and possibly dying, scientists have said.

As the whale has not been seen for a few days scientists are calling on people living along the Mediterranean coastline to look out for it.

It is around eight metres long, and is extremely underweight.

The whale has previously been tracked getting closer to the Gard coastline, but it could also drift towards Sète, in neighbouring Hérault.

Anyone who believes they have seen the whale is asked to note its GPS and to contact wildlife protection agency l'Office français de la biodiversité (OFB) for Bouches-du-Rhone as soon as possible on 06 87 91 03 32.

The whale is thought to be around 15 months old. It was seen off the coast of Morocco in March, and more recently off the Italian coast.

This is the first time a grey whale has been seen in the French Mediterranean, and it is thought to be lost.

Grey whales live in the Pacific Ocean off the coast of Mexico in winter and Alaska in summer.

Adrien Gannier, vet and member of the Réseau national échouages de mammifères marins told La Dépéche: “It is possible this whale, born in California, got lost in the Beaufort sea during its first feeding season, and instead of coming back down the Pacific, crossed the Atlantic, and then got trapped in the Mediterranean.”

Scientists hope to find the whale so they can understand where it is from and how it strayed so far from its usual habitat.

However the OFB said in a statement, that if very unwell it could “sink to the bottom before scientists can take necessary samples to help identify and study it.”

Mr Gannier is more optimistic. He said: “It seems in quite good health, but has lost weight as its eating habits do not suit the Mediterranean."

He hopes the whale will move down the Spanish coast, before returning to the Atlantic sea near Gibraltar, and heading back to the Pacific the way it came.

Count hedgehogs in your garden to help French study

14 hours ago
4
Coronavirus: Daily updates on the situation in France