Hermione set to lure millions to Normandy in 2019 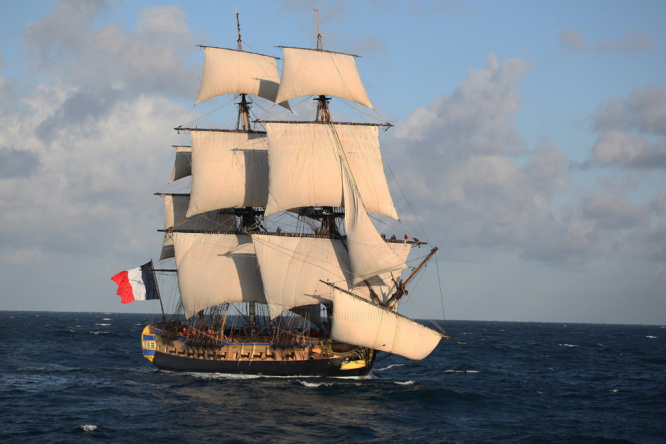 AFTER drawing 700,000 people to the quaysides of the main Mediterranean ports this year, the replica 18th century frigate Hermione will be heading for Normandy, the D-Day beaches and Rouen next year for its 2019 tour.

The ship will call in at Cherbourg, Ouistreham, Saint-Nazaire/Nantes and Rouen in a tour that coincides with the 75th anniversary commemorations of the D-Day landings. Other towns such as Dieppe, Le Havre and Caudebec en Caux are also in talks to be host ports.

Hermione is one of the world’s largest wooden sailing ships – 66m long in total, with a main mast topping off at 47m above the sea, 2.2km2 of sails and 25km of ropes – and will be a key tourist attraction on the Normandy coast. Find out more in article we did earlier this year where we spoke to some of the crew.

It has been visited by millions since it took its first sea voyage, across the Atlantic in 2015 to commemorate the original Hermione taking the Marquis de La Fayette to Boston, US to help George Washington in the American War of Independence.

Hermione is crewed by professional sailors and young volunteers who take part for some or all of the voyage. There are 80 people on the ship – compared to more than 200 in the 18th century original. The volunteers have had to master various traditional sailing skills, including knot tying, as well as developing a head for heights for stints in the rigging.

Both the original and the replica were built in Rochefort, Charente-Maritimes. The original took six months to build in 1778 but the replica took a painstaking 17 years, using the talents of hundreds of craftspeople from around the world and working from the original French navy plans for the sister ship that were discovered in the British Admiralty.

The 2019 voyage will be titled Normandie Liberté and is timed to mark D-Day and Franco-American friendship and starts at Cherbourg on May 6-8 in the Bassin du Commerce in the centre of the town. The port is home to the French nuclear submarine fleet.

The D-Day port of Ouistreham Riva-Bella will host Hermione next with a visit to the Canal de Caen before heading to Saint-Nazaire and Nantes from May 23-27 with a special event on May 25 with thousands of other boats on the Loire.

Heading for the Seine for June 4-6, Hermione will visit Rives-en-Seine before joining the Armada de la Liberté heading 120km upriver to Rouen with many others of the world’s largest sailing ships. It will be in Rouen from June 6-16 for the Armada event that unites 30 Tall ships, international warships and thousands of others. Up to three million visitors are expected.

The Hermione’s 2018 voyage round the Mediterranean saw 200 young people of 34 nationalities crewing the ship as volunteer gabiers over four months. It drew 700,000 to the quaysides and coast to watch and 85,000 paid for the chance to spend time on board. In all, it travelled 12,500km.

For the future, the Hermione’s organisers in the Association Hermione – La Fayette are looking to organise a world trip, perhaps in 2020.