Macron: May 11 is start of deconfinement in France 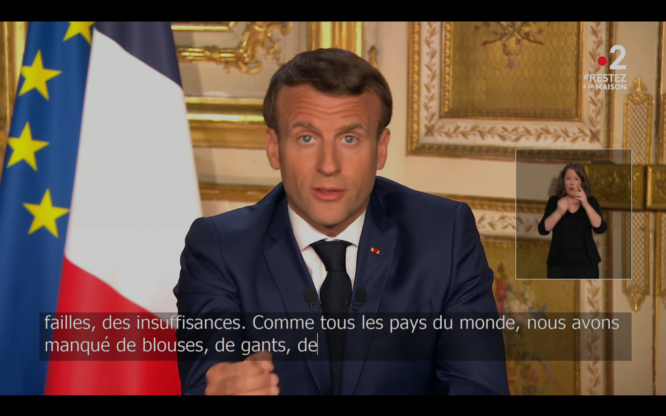 Schools and crèches will open progressively from May 11 so that all children can benefit again from schooling, currently some do not have internet access.

Workers in various sectors will also return to work then but restaurants, cafes, hotels and cinemas / theatres will stay closed. Large festivals will not recommence until mid-July. The situation will be evaluated each week and rules adapted as necessary.

Testing will accompany the move towards deconfinement, with health workers and the most fragile in the community taking priority. From May 11 France will be in a position to test everyone showing possible symptoms of Covid-19.

A voluntary and anonymous mobile telephone application is being reviewed and before May 11 the concept will be debated and clarified with an emphasis on following democratic principles, said the president. Many issues still are unknown about the return to normal life.

Not many French people have actually caught the virus meaning the ‘herd immunity’ principle cannot come into play. A vaccine is therefore the solution, he said, with more money going to funding this.

As to treatments, all options are being explored. President Macron stressed that much is still not known about the virus and everyone must keep going with courage.

From May 11, in partnership with mayors, the public will have access to masks due both to masks being imported now and also the work within France currently underway to make masks. President Macron did not speak about an obligation to wear a mask but mentioned a systematic use in certain situations such as within public transport.

In two weeks a more detailed plan for the May 11 deconfinement will be revealed by the government.

Vulnerable people with existing illnesses should remain isolated for longer so as to be protected.

The president was speaking from the Elysee just after 20:00 after the traditional applause and singing for health workers. It was his fourth address to the nation about the virus.

“Each of you, through your civic-mindedness, by respecting the rules of confinement, have made a change. The results are in. Several regions have been spared, and over the last few days, the number of people going into intensive care has been decreasing.

"Like every country in the world, we ran out of hospital gowns and we couldn't distribute as many masks as we wanted. As soon as these problems were identified, we mobilized. But I fully realize that when you're at the frontline, it's hard to hear that a global shortage is preventing deliveries (...). Wartime-like production has been established.

"Like you, I've seen failures, too much delay, unnecessary procedures, weaknesses in our logistics. We will draw all the consequences in due course.

“But the epidemic is not under control. We must continue strict home confinement.”

The president also emphasized that everyone suffering from other serious illnesses and chronic diseases must continue to receive all necessary care.

He announced a cancellation of charges and the strengthening of specific aids for businesses. Mayors will also be able to give financial aid to struggling families.

The announcement came as the latest figures released show the death toll has risen to 14,967 in France since the beginning of the epidemic (+574 in 24 hours).

In total 9,588 people have died in hospital and 5,379 in care homes and other establishments, the Directorate General of Health announced.

Find an English translation of the speech here: https://tinyurl.com/ybcd3np6