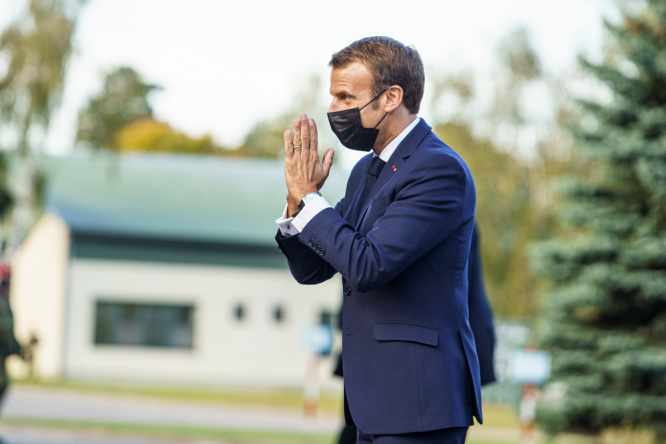 A man who tried to slap President Emmanuel Macron during a visit to southeast France yesterday (June 8) shouted ‘Montjoie Saint Denis’ before the attack. Who is the attacker, and what does it mean?

The man, who was caught on video in the attack, shouted: “Montjoie Saint Denis! À bas la Macronie (down with Macronism)”.

President Macron has since sought to play down the attack, saying that it was an “isolated incident” perpetrated by “ultraviolent individuals”.

What does the phrase mean?

While ‘Macronism’ simply refers to a word for President Macron’s political movement, the phrase ‘Montjoie Saint Denis’ is a slogan that comes directly from the royalist history of France.

It was used as a battle cry by former kings of France, and also appears on old coats of arms and symbols used by kings of Spanish region Navarre.

Now, it is known to be used by followers of extreme-right ideology.

After Mr Macron’s incident, MP Eric Coquerel said that he too had the phrase shouted at him during an “attack from the ultra-right group Action Française”.

The late historian Anne Lombard-Jourdan was a specialist in French history, especially the era during which the phrase was used. Her work details the complex history of the term “Montjoie”, and its possible various meanings.

In a 1993 article on the subject, she wrote: “In the case of Munjoie, Montjoie and montjoie...the meaning is consistent with the phrase 'country protector'.”

To support this hypothesis, she referred to the ancient geographical definition of the term ‘monjoie’: a mound of earth used to honour an important event, in this case, Saint-Denis, where the first bishop of Paris - who was seen as the ‘Protector of Gaul’ - was beheaded in the ‘Christian tradition’ in the second century.

She also said that the phrase has links to a pagan ‘protector god’, whom the Francs claimed as their own, and renamed.

The Larousse encyclopedia refers to ‘montjoie’ as “the battle cry of the king’s troops in France, which appeared in the 12th century”.

The term is also linked to the sword of Charlemagne, which appears in history as a symbol of protection, defending the country against invaders, Ms Lombard-Jourdan wrote.

What is known about the attacker so far?

Two men aged 28 are still in police custody, in connection with the offence of ‘unprovoked violence against a person holding public authority’.

The men, whose names have been revealed only as Damien T. and Arthur C, were not previously known to police or authorities.

The first man tested positive for alcohol in his blood, it has been reported, and early investigations have found that Damien T. may have links with far-right or fascist groups.

Weapons and a copy of Adolf Hitler’s infamous book Mein Kampf have been found at the home of one of the men.

Damien T. has been found to subscribe to a YouTube channel run by a far-right ‘influencer named Papacito, whose previous videos include how to attack a member of La France Insoumise party.

Leader of the party Jean-Luc Mélenchon has previously said that he believes the influencer should be investigated for ‘incitement to murder’.

Damien T. also follows an account by Julien Rochedy, former president of the youth branch of the Front National (Rassemblement Nationale); and the activities of the ‘Équipe Communautaire Paris’, which is a group affiliated with the white supremacist network ‘Les Braves’.

He is also president of a historical martial arts association, and a photo posted to his social media Instagram account shows him in horse-riding clothes, including a long sword strapped to his side. This might also explain the use of the old military term ‘Montjoie Saint Denis’.

Investigations into the attack and its motivations are still ongoing. Authorities have said that they will decide, either today (June 9) or tomorrow (June 10), their “judicial direction” on the case.

The president’s security team has already said that it does not believe that security around the crowd where the incident took place, was sufficient. One of the team said that they had advised the president not to approach the barriers before he did so.

Yet, government spokesperson Gabriel Attal has denied that the President was warned about approaching the crowd beforehand.

Assemblée nationale president of the LREM party and former interior minister, Christophe Castaner, said that “zero risk does not exist”.

He said: “The level of protection for presidents and politicians in our country is high. It is at a very good level, and the men and women who are around the President of the Republic are very high quality.”

Video: Man attempts to slap President Macron
New critical version of Mein Kampf to be sold in France from June 2