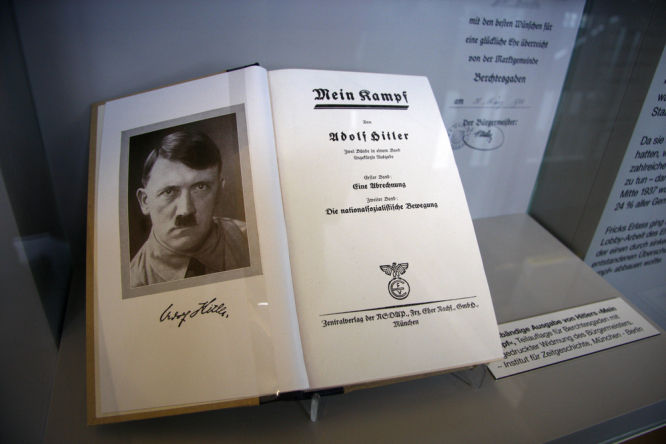 The continued publication of Mein Kampf is controversial. This new French edition will be two-thirds criticism Pic: 360b | Shutterstock

A critical version of Mein Kampf, the racist and anti-Semitic book written by Nazi leader Adolf Hitler, is to published in France from June 2, by Paris-based publisher Fayard.

The proceeds from the sale of the new version will go towards the concentration camp memorial charity the Auschwitz-Birkenau Foundation.

The book will be called Historicising evil, a critical edition of Mein Kampf, confirmed publisher Fayard. It will be 1,000 pages long, of which two-thirds will be criticism and annotations.

The edition will be available on order via bookshops only, not on general sale, and will cost €100.

In a letter sent to bookshops on Monday 17, and later seen by Agence France-Presse, Fayard president Sophie de Closets, said: “To sell this work, we have chosen not to proceed to [normal distribution], but to offer ‘Historicising evil’ via direct order by you, booksellers.”

Mein Kampf was written between 1924-25 by Adolf Hitler, then-leader of the NSDAP (Nazi) party, during a spell in prison after the failure of a coup d'état (‘the Munich or Beer Hall putsch’) for power in 1923.

It is effectively his manifesto, in which he set out the racist and anti-Semitic ideas – such as designating Jews as ‘enemies of Germany’ – upon which he launched his later political career from 1933, before he became Fuhrer and took Germany into war.

It is often considered being long, boring, awkwardly written, and rambling; and in a style that served to demonstrate Hitler’s growing racism and paranoia.

Fayard created the new edition with renowned translator Olivier Mannoni, who has also worked with authors such as Sigmund Freud, Stefan Zweig and Franz Kafka.

Fayard said: “Our committee of historians, led by Florent Brayard, has translated, adapted and lengthened the 3,000 notes of the German edition, and written a general introduction and 27 chapter introductions.”

The first French edition of Mein Kampf was titled Mon Combat (My Fight), and has around 700 pages. It was first published in 1934 by the far-right editor of publishing house Nouvelles Editions Latines (NEL), Fernand Sorlot, and is still available from there.

Ms de Closets said Nouvelles Editions Latines is an “extreme-right publishing house” and said that the book sold almost 5,000 copies last year. She said the book is still “very easy” to find and order “in one click” online.

Fayard itself published an edition of the book in 1938, under the title My Doctrine. That edition was shorter, and several anti-France passages – of which there were many due to France’s role in winning World War One – were edited out.

The book is usually known as My Struggle in English.

‘No question’ of book being ‘lucrative’

Ms de Closets said: “There is no question of this publication being lucrative, so the Auschwitz-Birkenau Foundation, which conserves the concentration and extermination camp [of the same name], will hold the rights to the first copy sold, and all the profits that may come from [the edition’s] sale.”

Eliane Calmann-Levy, the descendent of the founders of the publishing house of the same name, has written a public letter to French Culture Minister Roselyne Bachelot, asking for her assurances that the funds generated by the sale of the new edition will be “transparent”.

She has called for “access to detailed accounts of Fayard”.

The continued publication of the book is controversial.

Some argue that it should be forgotten, while others say that critical editions of the racist tome are necessary in order for historians and social commentators to understand Nazism, in a bid to understand the historical context of the movement, and to prevent similar forces from rising again.

Critical editions of Mein Kampf already exist in other languages.

In 2016, when the book entered the public domain, a German edition was published by a historical research centre in Munich. That edition ran to almost 2,000 pages over two volumes.

And in January this year, publishing house Bellona, based in Warsaw, Poland, published a critical edition in Polish, which ran to 1,000 pages.

10 hours ago
4
How will foreign visitors to France use the health pass for going out?