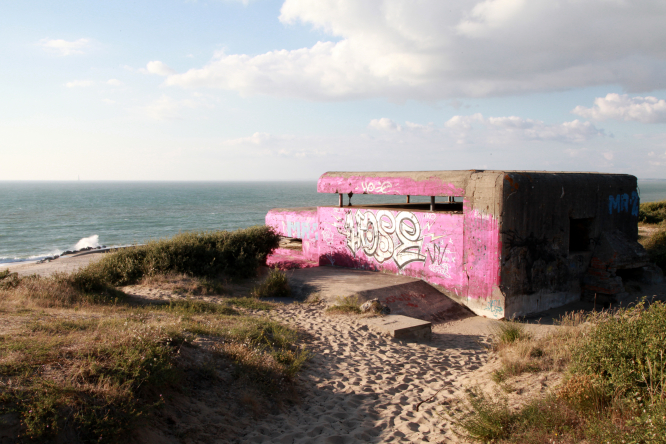 Soulac-sur-Mer, at the mouth of the Gironde, was a key defence position for the Nazis, preventing the allies sailing into Bordeaux Pic: Médoc Atlantique

The remains of Nazi World War Two bunkers around the coastline are usually more remarked on for their ugly appearance than their architectural interest.

Some passionate amateur historians, however, have spent years researching them to tell their remarkable story.

The building programme was highly organised and their conception and design were ahead of their time.

In France alone, some 150,000 workers were taken on to build them, most enlisted under service du travail obligatoire (STO) rules, when thousands of French workers were forced to work for the war effort.

The subject is still sensitive because it required French labour and construction companies to build them, and they are an unpleasant reminder of the Occupation.

Jean-Paul Lescorce has cleaned up 26 bunkers over the past 23 years at Soulac-sur-Mer, at the mouth of the Gironde, a key defence position for the Nazis, preventing the allies sailing into Bordeaux.

He is 83 but he still goes to the bunkers and brushes out the incessant sand that blows in, has researched them in detail, and gives guided tours, via the Médoc Atlantique Tourist Office.

Mr Lescorce remembers what life was like after 4,400 German soldiers arrived in his home town on June 27, 1940: “My mother and father owned a cafe, which was requisitioned by the Germans.

“The troops were ordinary soldiers and many secretly hated Hitler and wanted to get back to their family, but they had to stay until April 20, 1945.

“To me, a young boy, the soldiers were my friends who gave me chocolates and sweets.

“My father was part of the workforce under the STO, so I witnessed the construction of the bunkers built between 1941 and 1943 – an incredible achievement in so short a time.”

“As well as defence, there were others for the commander’s HQ, for storing water, food and ammunition.

“The soldiers did not sleep there. They had already built a village out of wood for their lodgings, but there were beds and provisions so they could stay if attacked.

“The bunkers had walls at least two metres thick, made up of concrete reinforced with iron. The smallest in my area is 200m3, containing 10 tonnes of iron, and the biggest is 1,500m3, with 65 tonnes.”

At the beginning of the war, Hitler created military-engineering company Organisation Todt, named after the construction engineer at its head, Fritz Todt. It was responsible for building concentration camps as well as bunkers.

“The materials came from all over Germany and France, by boat, train and lorry,” said Mr Lescorce.

“Some companies still in existence today do not like to talk about it but they made a lot of money from this endeavour. “First, the labourers dug a hole or made a flat surface with shovels. Then concrete was poured in from huge mixers, brought to the site on rails laid for the purpose.

'My father worked on one bunker where the concrete was poured for a continuous 46 hours, with small teams working in rotation to get the job done'

He said the bunkers had modern facilities: “There was electricity, with two supplies: one from the grid, plus standby generators. If the electricity did fail, white strips in phosphorus and radium were painted above the doors in the commander’s bunker so they could at least find their way around in the dark.

“They were insulated with paint containing rubber, and heated with wood and coal burners. Everything was thought through.

“They had advanced ventilation systems. There were periscopes to see out from inside, and decontamination showers.

“For communication, there were radio posts and telephones.

The doors were on the east side, away from the sea and potential attack. In the emergency quarters were beds, tables and chairs, which all folded away to take up less room.”

North east of Paris, near Soissons, Aisne, Opération Todt was responsible for a bunker complex, not on the coast, but inland. It was created as an operational headquarters that Hitler could work from, though he only spent one day there.

The Margival camp belongs to the Laffaux commune and is looked after by an association of volunteers, Le Ravin du Loup 2 (ravinduloup2.wixsite.com) – French for the name Hitler gave the site, “the wolf ’s ravine”.

The group organises visits during the summer. Its president Didier Ledé said this was another huge programme. Some 22,000 workers constructed 475 bunkers in a military area covering 90km².

He said every type of bunker to be found on the coast was built at Margival.

“Work began in 1941 on the camp, which was identical to four other sites in Europe and Russia. The majority of the labourers were STOs, plus prisoners of war and common criminals.

“Hitler’s bunker was in two blocks. One part was in a wooden chalet with living quarters, including bath, toilet, washbasin, offices and a conference room. The wooden part no longer exists.

“The second part is still standing and was for shelter with four metre-thick walls.

“It was used as a command centre, but Hitler only came for one meeting, on June 17, 1944, with, among others, his top commanders Rommel and Von Rundstedt.

“During the meeting, there was an air raid warning and they had to go into the high security bunker for an hour.”

He said there were bunkers on the site for every purpose, including stores for petrol supplies, gun stations and accommodation. “The whole complex was sophisticated, with electricity, a water filtration system to prevent poisoning, and telephone, telex and radio.”

Mr Ledé has spent 10 years researching the history of the site and has written a book: “Our association would like to reconstruct the conference scene for visitors, but also put up an exhibition about the STOs.

“Many were sent to work in Germany, and ended up in concentration camps.

“No one talks about them and this would be a fitting place for a memorial, something some of them were forced to build.”

6 hours ago
5
Tax: France to debit 10m households which have not paid enough

Banks to tighten rules on getting a mortgage in France
25 September 2021
More from Property
More from Connexion
Get news, views and information from France
Join the newsletter
Subscribe to The Connexion