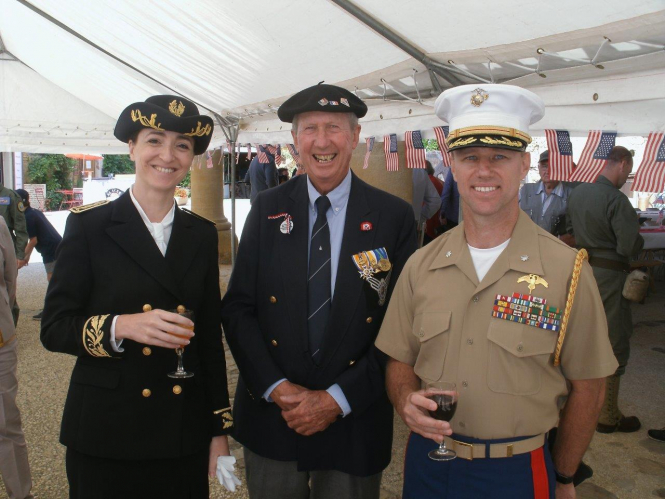 A secret World War Two US Army mission to help the French Resistance and a covert British SOE unit could be commemorated by a new walking trail.

Retired Dutch naval officer Ronald Knoth wants to raise money to install explanatory signs along the 20km route the officers of Operation Percy Pink took from their 1944 landing place near Cadouin, Dordogne, through woods and along little roads to Château de Bétou in Saint Cyprien.

Mr Knoth, who is fascinated by the history of World War Two and has travelled the world researching the conflict, said the operation ran from August 12 to September 10, 1944, and deserves to be remembered.

His interest started by chance when he spotted two old photos of soldiers on display in Cadouin mairie, not far from his home. “They were labelled Canadian but I knew from their uniform they were American,” he said.

“I wrote to the Pentagon and was amazed to receive a reply, telling the whole story. I was also given access to the documents relating to the official debriefing in the UK in 1944, which was very detailed, even giving accounts of the food that was eaten."

“I contacted the mairie and they agreed to organise a celebration for the 75th anniversary of the mission in 2019. I managed to contact the families of two of the American officers, who came over for the ceremony on August 12.

“Local Resistance fighters also took part, and the son and grandson of one of the SOE officers also came.”

On August 12, four aircraft took off from Harrington in Northamptonshire. Three reached the drop site, which they recognised when a Resistance fighter signalled the letter C with a lamp. One plane did not spot the code and returned to base.

Thirteen parachutists were dropped from the planes, along with more than 50 containers of weapons. On the ground, they were met by two British officers and members of the Resistance and taken in gas trucks to Resistance headquarters at Château de Bétou.

Their subsequent missions included the destruction of fuel storage in Agen and the securing of a German fuel train in Marmande.

It was hot and locals used the parachute material to make light summer shirts. On September 10, the soldiers returned to the UK.

Mr Knoth has taken part in the Budget Participatif in the Dordogne, where locals can suggest projects for council funding, asking for €4,950 to set up the trail to allow anyone to walk, cycle or drive along the path they took from landing.