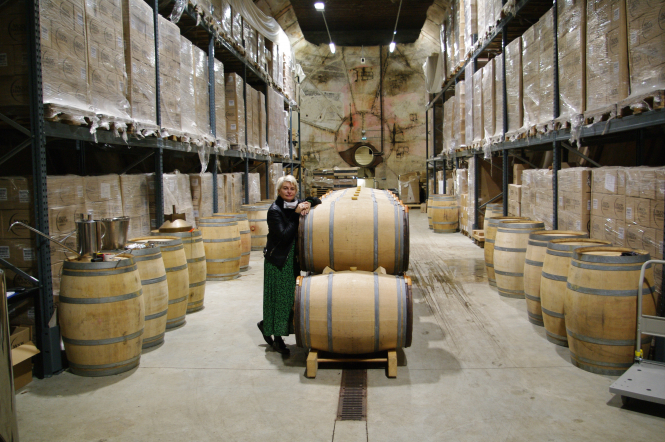 The bunker remains the property of the Bordeaux port but Moon Harbour has been given two 25-year leases – “long enough for some serious maturing to take place,” said Mrs Médina.
By Connexion journalist

The bunker, designed to be an immense bomb-proof reservoir of diesel for German U-boats, was built by Spanish and Italian prisoners and French forced labour at Bordeaux.

Before it could be connected to the U-boat bunkers 300 metres away, the allied invasion of Normandy in 1944, and landings in the Mediterranean, prompted occupying German soldiers to flee.

It was, more or less, chance that led Yves and Jean-Philippe to find it.

In 2012, the two friends and whisky enthusiasts were sitting in a cafe with a glass each when they decided to start researching the possibility of a Bordeaux whisky, even though neither had experience of the drinks industry or distilling.

Why a whisky and not a Bordeaux brandy to match the grape-growing and winemaking around the city? “Simply because they are passionate about whisky – along with most French people, who are the biggest whisky drinkers in the world, 2.15 litres per person each year,” said Aude.

After convincing themselves that the project was viable, the pair went to the Bordeaux port authority, which is working to attract businesses to port areas left vacant after the container revolution transformed shipping.

“It is an area of town which they hardly knew and, as they went past this bunker, they asked what it was,” said Aude. “By chance, the person they were with knew the history and had the keys to the entrance, a half-metre wide tunnel, and they crawled through into this huge space. They realised they had found an ideal space for maturing whisky.

To cut a door into the bunker required the services of a specialist concrete demolition team and took three months. The walls were sawn into blocks, each six tonnes in weight, which were then knocked out of the structure. After the doorway was filled, tonnes of rubble was used to raise the floor so a flat surface could be put in. Electricity, lights and barrel racks completed the transformation.

For the distillery, a 600m² building was built next to the bunker, with 200m² for a showroom and tasting room, and the rest for the stills.

It has two stills, made by the Stupfler stillmaker in Bordeaux, which use a system of pierced copper pipes to distil out alcohol.

Part of the bunker is being converted into a malthouse so the distillery will be able to make its own malt from 2022.

Ingredients are sourced as locally as possible. Barley comes from an island in the Gironde estuary, and seaweed from Charente Maritime is used to smoke malt to avoid importing peat.

The whiskies are matured in barrels which once stored wine, giving unique aromas to them.

Overall, €3million has been invested in the project, with €400,000 from the Médinas and Jean-Philippe Ballanger, €600,000 loaned from a fund to help new businesses from the European Union, and the rest from two banks – one lending for the building work and the other for operational expenses.

The distillery’s first single malts went on sale in October. A blend launched earlier in 2020.

The bunker remains the property of the Bordeaux port but Moon Harbour has been given two 25-year leases – “long enough for some serious maturing to take place,” said Mrs Médina.

Visits to the distillery, including to the bunker, are available for €15.

1 day ago
4
French farmhouse renovation: DIY tricks to get rid of rats