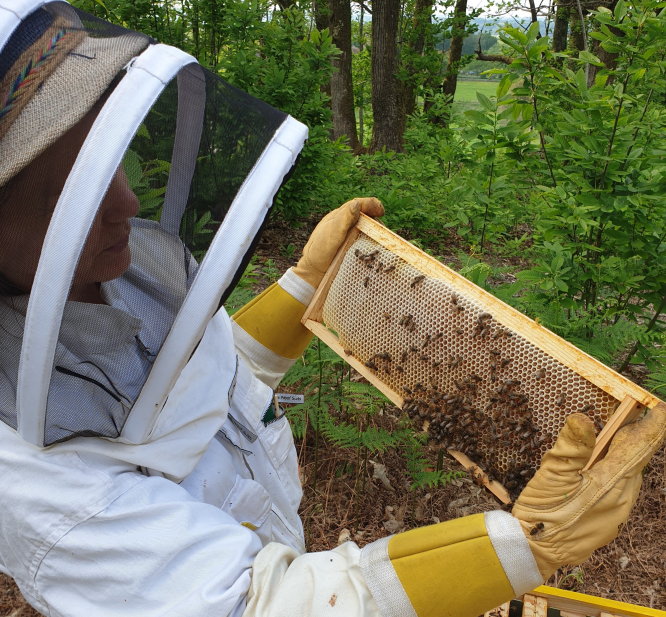 Hives of black bees are being brought back into commercial use by French beekeepers who hope they can revive an industry hit hard by climate change, pesticides and new predators, such as Asian hornets.

The name is given to all wild bees, which are usually smaller, hairier and darker than domestic bees, but the true black bee, apis mellifera mellifera, is the commonest of the 20,000 varieties in France.

It makes up 35% of all bees but only about 10% of those used for honey are black bees.

'They are adept at seeing off predators, including the dreaded Asian hornet'

There are different varieties across the country, with the best known in Limousin, Brittany and Haute-Savoie.

Beekeeper Céline Daubord said: “They are very well adapted to the flowers and conditions in their areas and are excellent pollinators because they are quick and hairy.”

She has hives of Limousin black bees at Châteauponsac, in Haute- Vienne. She added: “Black bees are small, not as productive as modern, mixed-variety bees, get agitated easily, do not adapt always to hives and honey frames, and sting quicker than many modern bees. That is why they have gone out of favour with many commercial beekeepers.”

France has about 54,000 beekeepers, whose bees make about 20,000 tonnes of honey a year, about half the amount eaten in the country.

There used to be enough honey produced to satisfy demand, but changing climate, disease, Asian hornets and pesticides mean half is now imported – and this is cheaper than domestic honey.

It was Ms Daubord’s training as an apitherapist which led her to research more about black bees.

Her Délices de Lylou-Beille business uses bees and honey in alternative medicine treatments, such as bee venom to help ease arthritis pain. She said: “I found out more about them and decided to have them in some of my hives. There are some old beekeepers who prefer them and I was able to learn techniques from them.”

Black bees also adapt to bad weather through various techniques – for example, the queen stops laying eggs when there is not much food.

They are also, importantly, adept at seeing off predators, including the dreaded Asian hornets, which can kill off hives of other bees.

“They do this by increasing the hive system of ventilation so much that all the air round the hornet is sucked away and they suffocate.”

The bees’ honey is known for its “all flower” flavour because of the wide range of the bees and the different flowers they visit.