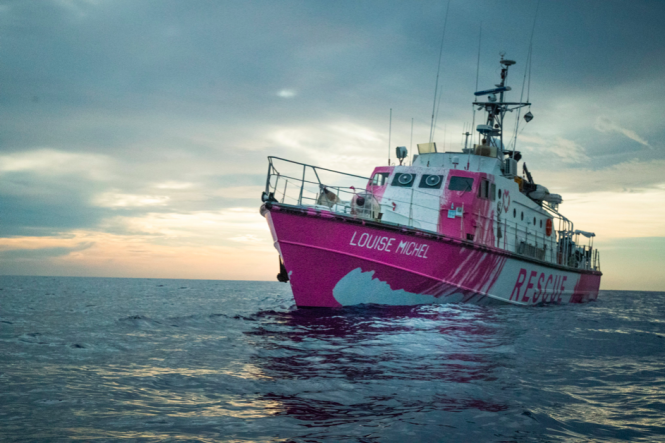 Deputy mayor Benoît Payan has said welcoming the refugees was a question of "humanity".
By Joanna York

Deputy mayor of Marseille (Provence-Alpes-Côte d'Azur), Benoît Payan, has said on Twitter and in an interview with news source France Info that the city of Marseille will welcome those onboard, even though other European countries have refused them.

He said: “These are refugees, these are people who are risking death. They are at sea in a critical situation. Maritime law, maritime history, the history of our city - they all call on our responsibility. Women and children are dying. In this situation, we don’t ask for papers or the legal status of these people. We save them.”

The MV Louise Michel, funded by British artist Banksy, left the port of Burrinia in Spain on August 18.

By August 28, the crew had rescued over 250 refugees from the sea after responding to distress calls.

Members of the crew reported that refugees were suffering from dehydration, fuel burns and injuries from being tortured in Libya. As the boat reached maximum capacity and could no longer move, the crew sent a series of mayday calls which were reportedly ignored or refused by authorities in Malta and Italy.

#LouiseMichel is unable to move, she is no longer the master of her manoeuver, due to her overcrowded deck and a liferaft deployed at her side, but above all due to Europe ignoring our emergency calls for immediate assistance. The responsible authorities remain unresponsive.

On August 29, the Italian coastguard evacuated 49 of the most vulnerable refugees and the body of one deceased person. Later that same day, those still on board the MV Louise Michel were transferred to a larger vessel, the German rescue ship Sea Watch 4.

Sea Watch 4 had then been refused a place to dock in Europe and forced to remain at sea, until Mr Payan made the offer to come to Marseille to those onboard.

When asked whether he had consulted with national authorities before deciding to welcome the refugees, Mr Payan replied: "This is a decision we've taken - we are also, incidentally, asking the President of the Republic, and Europe, to take responsibility.

“The Mediterranean cannot become a cemetery. We cannot let people die at sea. The question is simple: people are drowning. Our humanity is being called upon. We now call on the President to speak on this subject.”

The MV Louise Michel, painted white and pink, is a 31-meter motor yacht named after the 19th Century French anarchist. Its size makes it smaller and faster than many other NGO rescue vessels.

As well as funding the vessel, the artist Banksy has painted an artwork on the side – a picture of a girl in a life vest with a heart-shaped life ring, in the style of Banksy's famous work, Balloon Girl.

In an Instagram post referring to the boat, the artist stated satirically: “Like most people in the art world, I bought a yacht to cruise the Med.”