Masks in Paris: Rules for eating, smoking and exercise 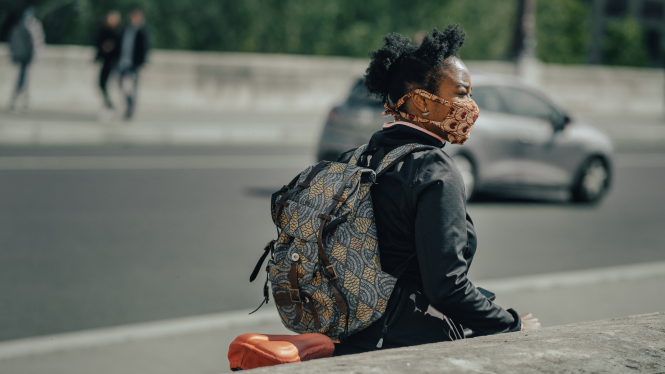 Cyclists and joggers do not have to wear masks, but pedestrians do in the French capital.
By Joanna York

From August 28 at 08:00, masks have been mandatory in public places in Paris and the departments that make up the Ile-de-France.

Those who refuse to wear masks in the capital face a fine of €135, although police have said an initial “period of tolerance” will be allowed while people adapt to the new rule.

However, the realities of living with the new law are not always obvious. A source close to those who wrote the law told news source l’Obs that while the law specifies that masks don’t have to be worn by those under the age of 11, “there is no exhaustive list” of other exceptions.

Instead, police forces are being encouraged to “demonstrate discernment and good sense” when it comes to implementing the law.

Cyclists and joggers do not need to wear masks while exercising in public places in Paris.

Despite an earlier decision that joggers and cyclists would need to wear masks, on 28 August the Préfecture de Police in Paris announced that mask-wearing would not be enforced for people “doing physical activity including running and cycling.”

Local authority the Mairie de Paris had challenged the Préfecture de Police over their initial decision to enforce mask wearing during exercise, with Mayor of Paris Ann Hidalgo telling news source FranceInfo: “Anyone who has been jogging ever in their life knows that it’s impossible to do with a mask.”

This corresponds to advice from the World Health Organisation which states: “People should NOT wear masks when exercising, as masks may reduce the ability to breathe comfortably. The important preventive measure during exercise is to maintain physical distance of at least one metre from others.”

Pedestrians must wear a mask when walking in Paris. Only children under the age of 11 and people with a medical certificate proving that they have disabilities that mean they cannot wear a mask are exempt from this rule.

According to the law, motorcyclists and people using scooters must wear masks.

However, there may be some flexibility with this rule. The source speaking to l’Obs said: “I’d be shocked if a motorcyclist wearing a full-face helmet was stopped by police. But people wearing open helmets should wear masks.”

Eating and smoking in public places

Mayoral deputy Emmanuel Grégoire confirmed in a tweet that people will be allowed to take their masks off to smoke and eat in public spaces in Paris.

The Obs source clarified: “If someone stops on a bench to eat, drink a coffee or have a cigarette they won’t be fined,” as long as they put a mask on as soon as they have finished.

However, simply being in possession of food or standing with a group of smokers after you have finished smoking yourself does not give you exemption from wearing a mask. Otherwise, the source said, “We could have people walking around all day with a sandwich in their hand” to avoid wearing a mask.

Eating and drinking in restaurants

Rules for mask wearing in bars and restaurants in Paris have not changed. These include a one-metre distance between tables, and obligatory masks for staff, those standing at bars and for customers if they are moving around, to go to the toilet for example. Bars without tables should also avoid crowding customers close together.

Police are checking bars and restaurants to ensure that barrier measures in place. In the past month, ten establishments in the capital have been closed for not following the rules.

The rule was enforced from August 29 at 08:00 and will affect a total of 10,000 inhabitants in all communes in the Bas-Rhin department.

This comes as a new poll by Odoxa-Dentsu Consulting for news sources FranceInfo and Le Figaro has found that 75% of people in France are in favour of masks being made mandatory outside in all cities.

Covid-19: who are France’s anti-maskers?