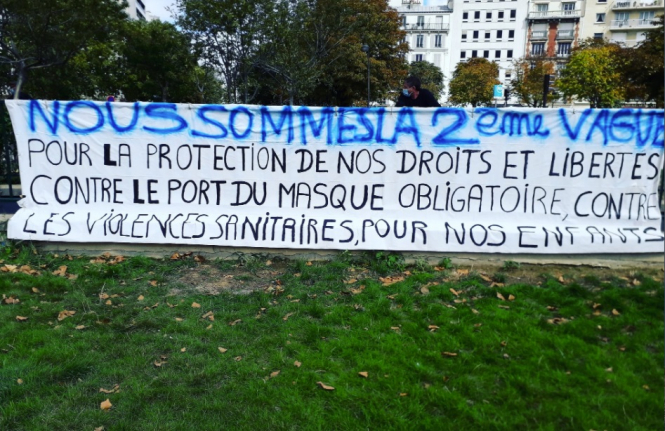 A banner at the anti-mask protest reads: "We are the second wave, for the protection of our rights and freedoms against mandatory mask-wearing..."
By Connexion journalist

Somewhere between this number attended the protest, which began at Place de la Nation in the capital, said the Agence-France-Presse.

Despite - or perhaps because of - the nature of the event, the police prefecture did not hesitate to fine people who were not wearing a mask, and announced that 123 - around half - of the group were given the standard €135 punishment.

In a Tweet, the prefecture added that one person was arrested for “outrage and rebellion”.

The protesters were accusing the government of “manipulating people with fear” and imposing mandatory masks on the population “without any scientific justification”. Placards read: “Stop the lies and corruption” and “the deep State will not pass”.

One woman who spoke at the protest, named Sophie, explained that she wanted “the freedom to choose”, and said: “People don’t want to wear masks, they are only doing so because they are afraid of getting fined. I am simply a citizen who is angry about the freedom-attacking measures that have no medical justification.”

Another protester said: “They are lying because at the beginning, they said that we did not need to wear masks. We want to know why there is this incoherence.”

Another, named as Anaïs, aged 26 and a sociologist, said: “There is no scientific proof of the usefulness of wearing a mask outside. Covid-19 is not that dangerous; it mainly kills people who are aged over 60.”

An attendee wearing a yellow vest in the style of the “gilets jaunes” protests from last year, added: “It is just another way for the [state] to make the people pay.”

The protest drew significantly fewer people than the larger events seen in recent weeks and days in the US, and other European cities such as Zurich in Switzerland and Berlin in Germany, with the latter event drawing as many as 18,000 people.

In an interview with Connexion, Rudy Reichstadt, director of media group Conspiracy Watch said: “In France, [the anti-maskers are] a very small minority movement and far less active than in the UK, Germany and US, where there have been big demonstrations.

“In France, the vast majority of people have mainly understood that though wearing a mask can be uncomfortable, it’s something we can all do for the health of everyone.”

Wearing a mask in enclosed public spaces is now mandatory across much of France, especially in areas where physical distancing is difficult.

Masks are also to be obligatory in colleges and lycees, and in all workplaces in which staff interact or share a workspace.

In its most recent recommendations on the issue, the World Health Organisation (WHO) says: “A fabric mask can protect others around you”, and it recommends mask-wearing, along with other hygiene measures such as physical distancing and handwashing.

This is in contrast to their recommendations at the start of the epidemic, when it was thought that scientific evidence did not offer conclusive reasons for everyone to wear a mask - especially people with no symptoms.

But in early April, the WHO said that new evidence prompted a reevaluation of its rules on face masks, and it later changed its guidelines.

In the latest update from health body Santé Publique France (Saturday August 29), there were 5,453 new cases confirmed in the previous 24 hours - a drop on the 7,379 reported on Friday August 28.

The rise in cases did not lead to a rise in hospitalisations, however, with 4,530 patients hospitalised due to Covid-19 causes on Saturday, a drop from the 4,535 on Friday. The number of people in intensive care rose slightly from 387 on Friday to 400 on Saturday.

Covid France: Why cases are up but hospitalisations stable