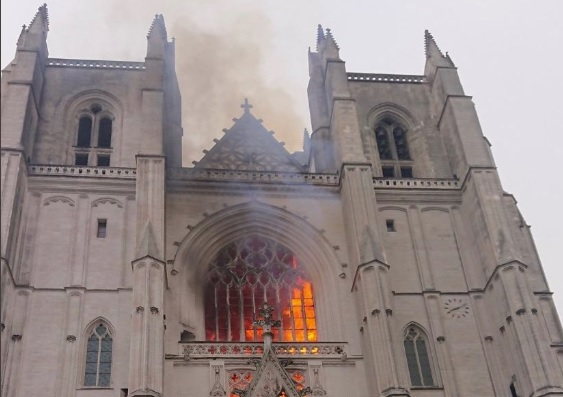 The fire was declared early yesterday but has since been contained. Investigations into the cause are now ongoing
By Connexion journalist

UPDATE July 20: The 39-year-old man who was being questioned has now been released without charge. His questioning was "procedural", the prosecutor said, and there is currently no suggestion he is "implicated" in the incident.

The 39-year-old man is a volunteer for the Cathedral, and was responsible for locking it up at night, the evening before the fire took hold.

The fire was confirmed as under control by the fire brigade yesterday morning, but heat remained into the afternoon and evening.

At this stage, there is no suggestion that the man is linked to the fire, and the questioning is merely “to check” the man’s movements, the prosecutor said. There had been “some contradictions” in his timetable, the statement said.

It added: “Nothing allows us to implicate him in the start of the fire; any conclusions [at this stage] would be premature.”

Further investigation is now ongoing into CCTV footage of the Cathedral, and expert scientific police investigators from Paris experts have begun exploring the building’s layout and electrical wiring.

There is some damage, which is making the work more challenging.

The main organ has apparently been “totally destroyed”, said General Laurent Ferlay, director of the Loire-Atlantique fire department, during a press conference. The stained glass window to the west has also shattered.

However, the “roof was not touched”, he added. He said: “We are not talking about a scenario similar to Notre-Dame-de-Paris or the [Nantes Cathedral] fire of 1972.”

At least two of the three sites of fire starts were electrical, early investigations suggest, which could mean the fire was started by an electrical fault. The system was checked at the beginning of 2020, but investigators have not ruled out this possibility.

Initially, reports said that the case was being considered a “criminal” investigation, but police have not ruled out the “accidental” line of enquiry too.

Pierre Sennès, République de Nantes prosecutor, told news source France Bleu Loire Océan: “Three sites of fire starting lead us to favour the criminal hypothesis, as it does not appear to have happened by chance.”

Beyond this, early reports say there appears to be no other evidence of criminal activity - with no sign of a break-in, nor tools or extra sources of combustion (such as petrol cans), nor any access from the outside once the Cathedral has been locked following its normal, strict security procedures.

The Cathedral rector told news source BFMTV: “Every night after closure, we inspect the cathedral to be sure that there are no intruders. Everything was in order [the night before the fire].

Emergency services were called at around 7h45 on Saturday morning, the fire brigade said, after passers-by noticed “flames behind the rosette [window]”.

There were 104 firefighters and 45 fire engines on the scene from across 20 departmental stations.

Yesterday, fire department general Mr Ferlay said: “We started work to investigate the whole building and to protect the works of art, in communication with the cathedral authorities. We are continuing investigations to be sure that there is no residual risk and no spread of hot gas into the high parts of the cathedral.”

President Emmanuel Macron tweeted his support for the firefighters "taking all the risks to save this gothic jewel".

He said: “Thinking of our firefighters bravely called up to contain the fire at the Nantes Cathedral. I send them my support and profound gratitude. I send my support to the Nantes people and share in their emotion.”

She said: “Major emotions: fire at the Nantes Cathedral! This jewel in our heritage is once again threatened. I will be in Nantes this afternoon.”

As news broke of the blaze, mayor of Paris Anne Hidalgo also tweeted her support, saying: “Support and solidarity from Paris to the firefighters who are currently bravely fighting the fire at the Nantes Cathedral.”

Mayor of Nantes, Johanna Rolland, spoke at a press conference soon after the incident, and visited the site.

Yet, she sought to reassure people that the fire this weekend was not on the same scale as the major incident of 1972. She said: “We all have these images in our heads, this story in our heart, but at this stage, the situation does not seem to be comparable to 1972.”

She sought to congratulate and thank the “formidable response and professionalism” of the firefighters, and added: “An enquiry will be opened immediately and I will ensure that everything is put in place so that we can establish the cause [of the fire] with exactitude.”

Nantes Cathedral has been classified as a “historic building” since 1862, and was built in the 15th century. It was the victim of a major fire in 1972, which was started accidentally by a blowtorch being used by a worker helping to restore the roof.

The Cathedral suffered severe damage and only reopened in 1985, following repairs and restoration work.