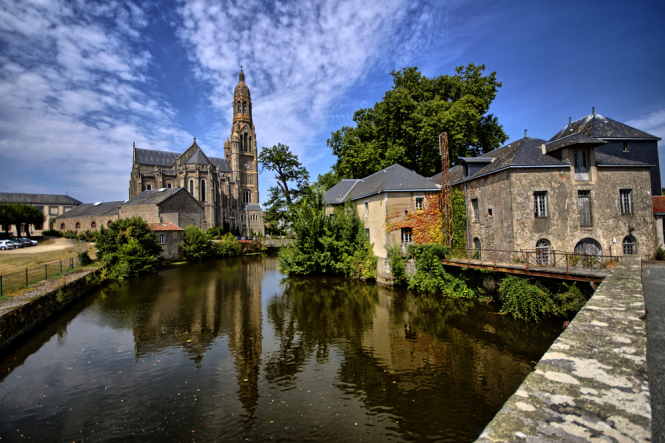 The body of 60-year-old Olivier Maire was discovered in his bedroom, in the religious missionary community in Saint-Laurent-sur-Sèvre Pic: Dan Newton / Shutterstock

A Rwandan man, who had been turned down for asylum in France, is being questioned over the murder of a priest in Vendée, western France.

The man, aged 40, handed himself in. He is suspected of setting fire to Nantes cathedral where he helped as a volunteer in Summer 2020. Here is what is known so far.

The body of a priest, 60-year-old Olivier Maire, was discovered in his bedroom, in the religious missionary community in Saint-Laurent-sur-Sèvre, Vendée, on Monday August 9.

The same morning, the Rwandan man handed himself into gendarmerie and confessed to the murder. He had been living in the priest’s religious community, and had worked as a volunteer.

What stage is the investigation at?

An inquiry has been opened into “voluntary homicide” (murder) and is being investigated by the gendarmerie in Nantes.

Any links to a terrorist motive have been ruled out so far, the prosecutor of La-Roche-sur-Yon, Yannick Le Goater, has confirmed.

He said: “In no way has the national anti-terrorist prefect been asked to work on this case.”

What is known about the man?

His name is Emmanuel Abayisenga and he holds refugee status.

He was known to police and is suspected of causing the Nantes cathedral fire of July 2020.

He was given accommodation at the missionary brothers’ community in May 2021, under a “residential obligation” order, and was being monitored by police, "with the obligation to clock in twice a month".

He was hospitalised and held in a psychiatric unit between June 20 and July 29, before being discharged back to the community.

He is now being held in a secure psychiatric unit under police custody. Mr Le Goater said: “An expert opinion is being sought to verify that his condition is compatible with police custody.”

The suspect has previously been the subject of several requirements to leave France, after unsuccessfully attempting to claim asylum.

The first was on December 1, 2016, which was cancelled by the Nantes administrative court; the second was on April 11, 2017, which was also cancelled.

The third date, on November 5, 2019, was deemed "not enforceable due to the judicial review decided by the judge".

Interior Minister Gérald Darmanin has visited the area to offer his condolences and be updated on the investigation.

He visited with Bruno Retailleau, Vendée senator and president of Les Républicains party, who knew the deceased well.

Mr Retailleau said "I knew him well [and] had come to appreciate [the priest’s] depth of faith. His death is a great loss.”

The interior minister tweeted: “Attacking a man of the church is to attack the soul of France”, and “I am sending all my support to the Catholics of our country after the dramatic assassination of a priest in Vendée.”

President Emmanuel Macron has also tweeted “all of his sympathy” to the local religious community, while Prime Minister Jean Castex spoke of his “deep distress” and “deep compassion” for those affected.

Alain Leboeuf, president of the Vendée departmental council, told FranceInfo: “I can barely describe the emotion I felt upon learning that one of our priests could be murdered in such a way when they are men who always try to do good. There was no warning, and we are stunned.”

The suspect’s status as an unsuccessful asylum seeker has prompted strong reactions from politicians, including Marine Le Pen, president of the Rassemblement National (RN) party.

Writing on Twitter, she said: “In France, one can apparently be an illegal immigrant, set the Nantes cathedral on fire, never be deported, and recommit a crime by killing a priest. [Here is] the complete failure of the state and Gérald Darmanin.”

RN spokesperson Jordan Bardella called on Mr Darmanin to “explain immediately how a man targeted by an obligation to leave the country was able to set fire to the Nantes cathedral and walk around in the Vendée several months later, free to kill a priest”.

On the other end of the political spectrum, the first secretary of the Parti socialiste, Olivier Faure, paid tribute to “Father Olivier Maire, who would no doubt have hated that his death would stoke a polemic”.

Les Républicains (LR) MP Éric Ciotti said: “An illegal immigrant man who violates the law should be immediately extradited and never be allowed to come back into France.”

He condemned the “lax approach” of the government, while his LR colleague Guillaume Larrivé called it an “appalling failure of the state”.

Mr Retailleau himself also asked: “This was the undocumented man who set fire to Nantes cathedral. Why was this person still in France?”

Head of the Auvergne-Rhône-Alpes region, LR MP Laurent Wauquiez said: “This man should never have been able to enter France, never mind stay here after the Nantes fire. This isn’t even a legal question, it’s common sense. The consequences of our laxity and blindness are now obvious”.

The interior minister later responded to Ms Le Pen, saying: “This foreigner was not eligible for extradition despite his arrest, as his judicial review was still underway.”

He accused Ms Le Pen specifically of “stirring controversy without knowing the facts” and said she should be showing compassion to the Catholic community instead.