New American Covid pill not yet submitted for European approval 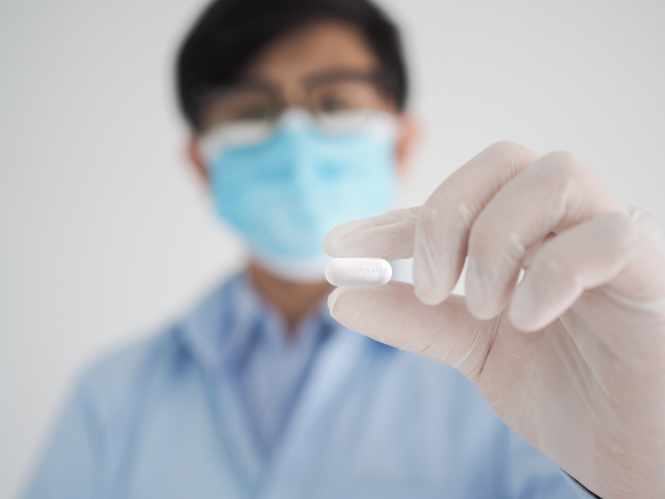 Molnupiravir inhibits the replication of SARS-CoV-2 in a patient's body, the virus that causes the Covid-19 disease Pic: banjerd titawong / Shutterstock

An anti-Covid pill that can be taken orally has been found to reduce the risk of hospitalisation and death by Covid by up to 50% in a recent trial.

The pill, called Molnupiravir, has been developed by US pharmaceutical company Merck, which is now applying for emergency use authorisation in the US.

France has only approved Covid vaccines for use that have also been approved by the EMA and it is likely to take the same course of action with any new anti-Covid pills.

Merck is not the only company developing an anti-Covid pill.

Pfizer, which in partnership with BioNTech, has created and distributed the most popular Covid vaccine in France, is also working on a pill that can be taken orally. The company could also be ready to seek regulatory approval for its treatment by the end of this year.

It is a pill that inhibits the replication of SARS-CoV-2 in a patient's body, the virus that causes the Covid-19 disease. Merck recommends taking one pill every 12 hours over the course of five days.

In a late stage clinical trial, Merck and its partner Ridgeback Therapeutics assessed 775 patients. All the patients had confirmed Covid symptoms.

Additionally, none of the patients who took Molnupiravir died, while eight patients on the placebo died.

The trial was intended to run as a phase 3 trial involving 1,550 patients, but it was stopped early due to the positive interim results.

The CEO and president of Merck, Robert M. Davis, called the results “compelling”.

“More tools and treatments are urgently needed to fight the COVID-19 pandemic, which has become a leading cause of death and continues to profoundly affect patients, families, and societies and strain health care systems all around the world,” he said.

“With these compelling results, we are optimistic that Molnupiravir can become an important medicine as part of the global effort to fight the pandemic.”

Peter Hornby, a professor of emerging infectious diseases at Oxford University in the UK, called the results encouraging.

“A safe, affordable, oral antiviral would be a huge advance,” he wrote on Twitter.

He warned however of the dangers of patients building resistance to the drug, therefore making it less effective.

Dr Peter Hotez, dean for the National School of Tropical Medicine at Baylor College of Medicine in the US, called the drug “exciting but with some caveats”.

He said that the way it works means that it cannot be given to pregnant women. He also cited concerns about patients growing resistant to it.

“This is no substitute for vaccination,” he wrote on Twitter.

“It’s not a miracle cure but a companion tool. So get vaccinated. Another issue is emerging drug resistance. If this is used indiscriminately this can be a problem with antiviral drugs.”

<blockquote class="twitter-tweet"><p lang="en" dir="ltr">4/5 this is no substitute for vaccination. It’s not a miracle cure but a companion tool. So get vaccinated. Another issue is emerging drug resistance. If this is used indiscriminately this can be a problem with antiviral drugs</p>&mdash; Prof Peter Hotez MD PhD (@PeterHotez) <a href="https://twitter.com/PeterHotez/status/1443898988948824071?ref_src=twsrc%5Etfw">October 1, 2021</a></blockquote> <script async src="https://platform.twitter.com/widgets.js" charset="utf-8"></script>

Merck has said that it expects to produce 10 million courses of its treatment by the end of this year.

The company also has a procurement agreement with the US government, in which it will supply 1.7 million courses of Molnupiravir to the US when or if it is approved by the country’s food and drug regulatory agency the FDA.

The company is also in talks over deals with several other countries, including Australia, Singapore, Thailand, South Korea, Taiwan and Malaysia.