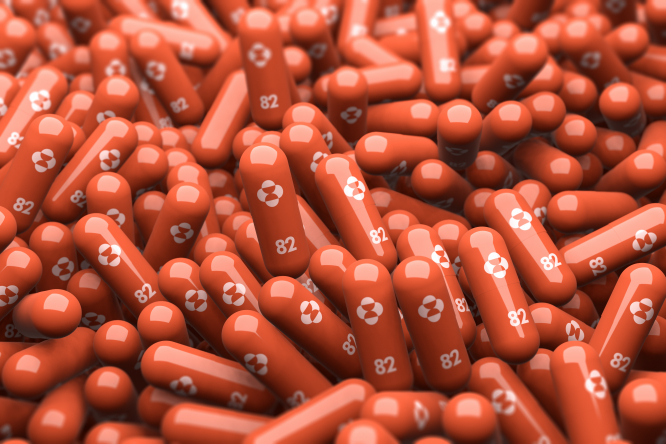 Molnupiravir could cut hospitalisations and deaths by half among patients with early Covid symptoms Pic: Quality Stock Arts / Shutterstock

The European Medicines Agency (EMA) has launched a rolling review of molnupiravir, an antiviral pill for the treatment of Covid.

The laboratory reported on October 1 that – if taken within a few days of a positive test – the antiviral would cut hospitalisation and deaths by half among patients with early Covid symptoms.

Experts believe that this easily administered drug could revolutionise the global fight against serious forms of the virus.

The antiviral is one of the first drugs to be developed specifically for treating Covid patients, and may be the first oral pill used to combat the disease in the EU.

Molnupiravir has been developed by US pharmaceutical company Merck and its partner Ridgeback Biotherapeutics.

This is because molnupiravir inhibits the ability of the virus to multiply within the body.

Merck has already sought approval from the US Food and Drug Administration (FDA), with a decision expected in the coming weeks.

The EMA’s review will assess the quality, safety and efficacy of the drug, continuing until Merck has compiled enough data to submit a marketing authorisation application. It is as yet unclear how long this will take.

The review could lead to Merck securing an order for molnupiravir from the EU, which said that it would only consider striking a deal once the drug’s approval procedure began, Reuters reports.

It is expected that people will be able to take the pill at home over five days to reduce their symptoms and accelerate their recovery, easing pressure on hospitals around the world. It could also be used as a preventative measure for people identified as close contacts of a Covid case.

However, international health officials have warned that a future rollout of molnupiravir could result in the same global disparities that have characterised the Covid vaccination campaign, especially as Merck has already signed deals with countries including the US, the UK, Australia and Malaysia.

To combat this, Merck has said that it is committed to providing timely access to the drug around the world, and is planning a tiered pricing approach which will enable poorer countries to pay.

The company is also seeking to license generic versions of the antiviral, “to build sufficient global supply of quality-assured product to orders globally,” a spokesperson told Reuters.

What is a rolling review?

Rolling reviews are used by the EMA to “speed up the assessment of a promising medicine or vaccine during a public health emergency.”

In normal circumstances, all of the data on a drug’s efficacy and safety would be needed at the start of a formal application for marketing authorisation.

In this case, the EMA’s human medicines committee will review data as it becomes available, allowing it to make a decision on the medicine’s authorisation within a shorter time frame.

What is currently being used to treat Covid?

At the beginning of the pandemic, doctors tested existing medicines such as hydroxychloroquine and remdesivir on Covid patients, but it has now been agreed that these drugs do not work to combat the virus.

Molnupiravir will be easier to administer than the medicines currently available, which are given intravenously and therefore can only be received in hospital. They also cost at least €1,000 per infusion.

Corticosteroids such as dexamethasone – which combats the hyper-inflammation often associated with serious forms of Covid – are also administered through a drip.

Other laboratories around the world are working simultaneously with Merck to find a treatment for Covid.

Pfizer – also trialling an antiviral pill – and Swiss company Roche – which is developing a preventative treatment – are two of the frontrunners in the race to find medicines that will treat symptoms of the virus.

France’s flu vaccination campaign begins: Here’s how to get your jab