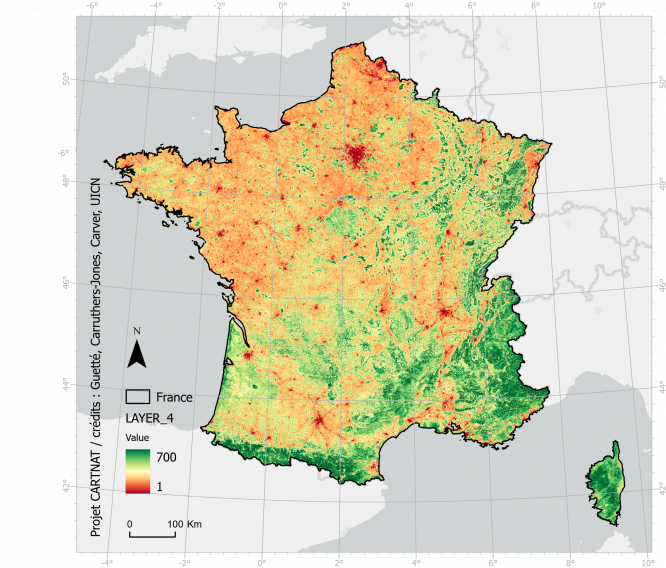 Cartographers from Britain and France have created a map of France highlighting the wildest parts of the country least impacted by human intervention.

Although the less accessible mountainous regions stand out strongly, researchers were surprised to find a variety of small seemingly wild areas spread out over French soil.

Some of them, such as that west of the Causses du Quercy, are currently afforded no protection at all.

The map uses a colour gradient ranging from green (most natural) to red (man-made), through yellow and orange.

The densest concentration of green areas, among the 10% most natural areas of France, are concentrated around the south and southeast. Corsica appears almost entirely in green.

First of all, researchers needed to determine the ‘wildness’ of every location on the map based on geographic data.

They did this using three main criteria: landscape integrity (considering how it might look in the absence of human intervention), the degree of autonomy left to nature and ecological continuity.

Alongside 18th and 19th century maps, satellite imagery was used to help measure the amount of development, the distance to roads and any other human infrastructure.

"The naturalness map is available to local decision-makers to help them design new protected areas," Jonathan Carruthers-Jones, a researcher at the University of Leeds and one of those involved with the project, told Le Figaro.

The map was presented at the IUCN World Conservation Congress in Marseille and by identifying parts of the country least impacted by human activity, should be useful in supporting Emmanuel Macron’s pledge to keep a third of the country’s protected areas all natural.

2 days ago
4
Shortages of goods in France: What is expected in the months to come?